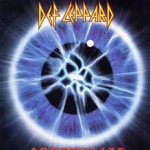 Def Leppard are Britain’s most successful rock bands, whose records adorn many a collection (and radio playlist too). 1987’s Hysteria, with hits like Poor Some Sugar On Me, was such a success it’s album everyone either owns or knows.

Adrenalize was the band’s fifth album, originally released in March 1992, recorded as a four piece, following the death of guitarist and founder member Steve Clark.

After two albums in the early 80s, that were sometimes associated with the New Wave Of British Heavy Metal (a term the band dislike, they were always far too polished, melodic and verging on commercial).

Their third album, 1983’s Pyromania, was a worldwide breakthrough (it went diamond in the US, with sales of 10 million), during whose recording guitarist Pete Willis was replaced by Phil Collen. Rock Of Ages and Photograph were hit singles that remain popular today. A 4 year delay (largely due to drummer Rick Allen losing an arm) before Hysteria, and that then brings us to Adrenalize.

Def Leppard weren’t exactly the quickest in the studio, and trying to follow the success of Hysteria would always be difficult. The process was also slowed by guitarist Steve Clark’s alcohol dependency, who spent several sessions in rehab. Sadly, shortly after being given an ultimatum by the band, he died of respiratory failure after mixing alcohol and prescription drugs.

By then preparation for the recording of Adrenalize had started, and the riff-meister Clark had demoed many of the tracks with the band before he died, receiving writing credits on six songs.

Back in 1992, CD was the format de jour, and the original vinyl release is relatively hard to find. With the LP having a solid feel, and photos and credits on the inner sleeve, the album looks and feels good.

Needle on the groove and first up is the hit single ‘Let’s Get Rocked’. With long-time producer Robert Mutt Lange busy working with Bryan Adams, the band co-produced the album with Mike Shipley. What’s immediately obviously from this catchy and radio friendly track is that the band have kept much of the feel alive from Hysteria. A decent riff, overlayed vocals and guitar. The sound is solid, a hint of warmth,

A jangly guitar intro before the band come in with a solid riff, ‘Heaven Is’ follows the band’s formula well.

While the band knew how to rock, up to a point, there was a distinct move in a hard pop direction from Hysteria (in places as much as Hysteria was from Pyromania), so while the band were never short of a catchy and solid song, there’s no question on that, but there’s very little new ground trod here.

A little less slick and cohesive is ‘White Lightning’, which otherwise is probably the album’s highlight. Running at 7 minutes, it’s a little chunkier and dedicated to the memory of Steve Clark.

Much like Hysteria, it’s not album you can really pull tracks out from (despite the number of singles released from the album), but there’s a feel that runs across the album, making it a very enjoyable listen beginning to end.

Whatever your views on the progression from the previous album, it’s still a very very good album that the record buying public loved at the time. This reissue feels and sounds quality too. ****