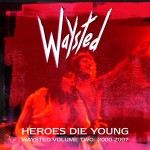 Waysted reformed early in the new millenium, just to prove that the world hadn’t ended.

This 5 CD boxset chronicles the band’s releases from when they kick started their career in 2000, to the date it ended, in 2007.

They relaunched with Wilderness of Mirrors, an album of demos, used as the basis for the band’s full scale 1985 tilt at the US album charts, Save Your Prayers.

‘Walls Fall Down’, ‘Black’n'Blue’ and ‘Singing To The Night’ are 22 carat gems, direct, uncompromising and filled with soaring hooks. With Danny (Tyketto) Vaughn on vocals, even in rough edged demo form, they buoy up Wilderness… just as they did the finished album.

Back From The Dead was the the first “new” album of the “new” era. This is what GRTR said at the time: “Opener ‘The Alternativa’ starts slowly but the pace builds to some real classic rock. ‘Dreams’ and ‘Must B More 2 It Than This’ both feature some catchy riffs and tunes. The whole thing just gets you nodding and foot stomping.

With Fin Muir on board, this is Pete Way’s band back at its best. In fact it’s better than the 80s Waysted stuff. You could argue the band truly are Back From The Dead.”

You’ll have guessed that Boot From The Dead bears more than a passing resemblance.
This was the band/the label looking to maintain momentum. Back From The Dead had made a few waves.

It has six tracks, including some energetic, good quality live versions of ‘Vices’ material plus covers of UFO’s ‘The Wild, The Willing And The Innocent’, and ‘No Place To Run’, both used as bonus tracks on the Japanese release of Back From….

The band’s unpolished production lets the raw, unadulterated hard rock do the talking, showcasing the band at their fiercest and most undiluted (guitarist Chris George was back, and it shows). It’s a perfect-picks set list, rescuing six explosive songs from the band’s first two albums, most especially ‘Love Loaded’, ‘Hang Em High’ and ‘Toy With The Passion’, all of which deserve repeated listening, then adding a sprinkling from later releases.

With the exception of closer, ‘Can’t Feel The Pain’, the tracks on the periphery of The Harsh Reality don’t quite seem to step up. But the rolling thundercloud of purposeful hard rock at the album’s core is all consuming.

Standouts, ‘Long Time Dead’, ‘Out Of Control’ and ‘It Wasn’t Me’ are full of driving, elemental music, folding a swathe of blues influences into the band’s own classic rock forms and structures, often electrifying, frequently just exciting.

It was quite a way to go out. Fin puts it best: “this album has been the most pleasing, refreshing and creative piece of work we have ever done…”.
Say no more. ****