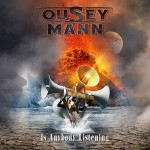 Both Chris Ousey and Steve Mann have  been on the UK rock scene as long as I can remember –the former singing with Virginia Wolf, Heartland and Snakecharmer among others, the latter the loyal sideman on 2nd guitar and keyboards for Michael Schenker and the Sweet as well as a core member of Lionheart.

However it was only lockdown that saw Escape Music bring the two together to make an album, though they have rejected a snappy band name –  Lionheartland perhaps?  The line up is completed by another seasoned figure in drummer Clive Edwards and Steve’s own wife Angela on bass.

‘The Flag’ kicks the album off with a big pompous intro and big vocals with Chris Ousey’s trademark vocals  supported by a wall of backing vocals, Praying Mantis/Lionheart style. It takes a little getting used to as the arrangements have a lot going on, but  ‘So it Begins’ is more direct with a big hook while  Steve Mann’s guitar solos on both this and ‘Brave New World’ are almost Schenker-esque in their melodic dexterity.

However singing in a distinctly heavier style than he is used to, the strain shows at times on Chris’ voice which can be a little thin and at times fitting uneasily with this old school traditional hard rock approach. However he has no such trouble on ‘I’ll Tell You When to Stop’ – despite an intro reminiscent of MSG’s ‘Cry For The Nations’, it has a totally different feel, with a spacious, funky and almost poppy groove brought to an unexpected and brilliant ending.

At an hour in length and with 13 songs, there are a few fillers for me – ‘Broken’, ‘Cruising At Altitude’ and ‘Before You Leap’ are not bad, just unexciting . But midway through the album come two of my favourite songs of the year to date – ‘Built For The Fight’ has an epic pomp metal feel and the slower verses this time show off Chris’ voice at its best.

The semi ballad ‘The Fall’ also has a different sound to much of the album but is superb, with a wonderful chorus and Steve’s solos exhibiting taste and control. The title track takes a different approach again, a slow loping blues like MSG’s ‘Rock You To The Ground’ (sorry that comparison again).

‘I Know Who I Am With You’ and ‘No Second Chances’  both have a classic Rainbow or Purple feel, notably the former which boasts some Jon Lord-esque organ and again both are brilliantly tied to a conclusion. Album closer  ‘Number One’ is a straight ahead rocker with Steve letting rip on guitar.

A health warning is in order that this is emphatically not an AOR album despite Chris Ousey’s past. However, with a few pleasant variations on a theme, it is a refreshing trip back to a style of classic melodic heavy rock all too rare these days. Recommended for those who pine for the glory days of Rainbow, UFO and MSG.   ****