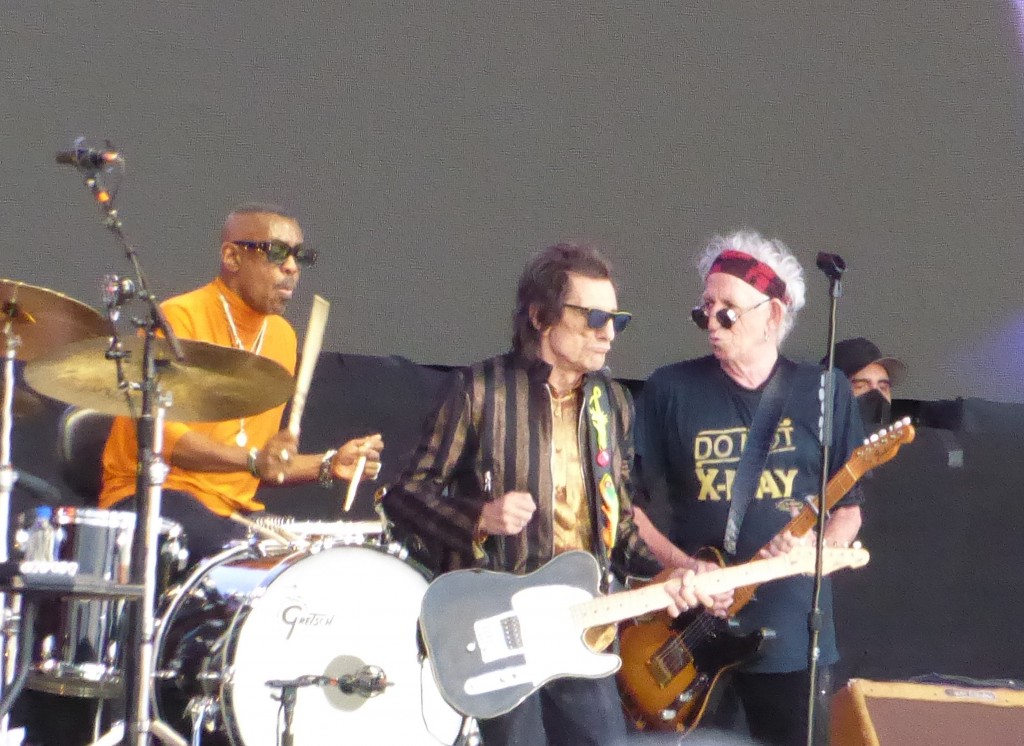 The Rolling Stones have become the first of the rock n roll generation to celebrate sixty years as a band, a remarkable achievement for music that many would originally have dismissed as a passing fad. Their legacy is secure, not just from a purely musical standpoint but also in establishing the business model of rock- they were the first band to realise the potency of large scale tours and the opportunities of merchandising, around that tongue logo, and indeed it was noticeable here quite how many people had band t-shirts compared to an average show.

When I saw them four years ago in Twickenham- both my own suburban neighbourhood and the area where they cut their teeth as a young live band- I assumed that might be a final chance to see them. But on atmosphere alone I couldn’t resist an opportunity to see them at Hyde Park, a fitting setting steeped in Stones history- notably a famous free show in 1969 after Brian Jones died, and more recently their 2013 appearance captured on DVD.

Proof of their continuing appeal came in a crowd spanning right across the age ranges, often with different generations within the one family; and a supporting cast of current indie rock darlings, including Courtney Barnett and Sam Fender, the latter having many fans present.

As in 1969 this show was under the shadow of the loss of a founder Stones member in Charlie Watts. His passing was marked in an appropriately classy and unmawkish way with a montage of the drummer through the years immediately prior to the music, and Mick Jagger in his introductory remarks stating how they missed him and dedicating the show to his memory. But Steve Jordan, clad in a natty yellow turtle neck like a seventies motown act, certainly rose to the challenge of filling his irreplaceable shoes and fitted in seamlessly to the overall Stones sound.

They opened with a pair of numbers from their earlier RnB days in ‘Get Off Of My Cloud’ and ‘19th Nervous Breakdown’, and the raucous singing along when it got to the choruses was a good sign for a show with atmosphere and the band were sprightly, even if the decibel level seemed a bit quiet.

At 79, Mick Jagger somehow defies time, his slender figure constantly running up and down an extended walkway in that characteristic loose limbed and snake hipped style. That inimitable voice has never been one of the greats technically, but the advantage is that he hasn’t needed to adapt its range over the years, and arguably age has given it added character. 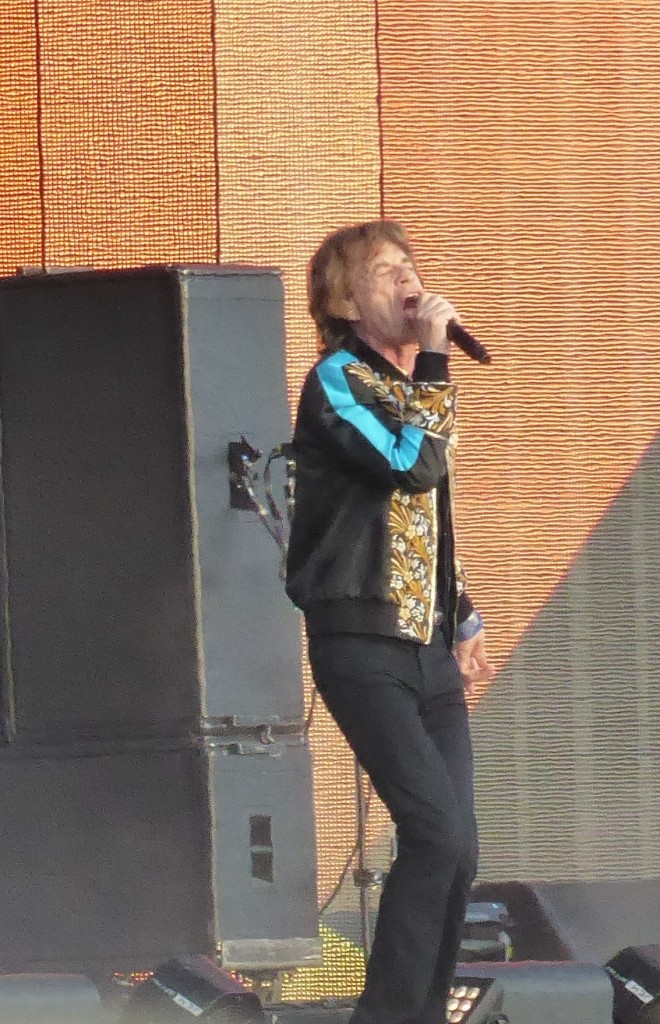 Either side of a couple of songs from their decadent early seventies years- ‘Tumbling  Dice’ with the horn section prominent,  and Keith Richards strumming an acoustic to the start of ‘Angie’ which saw the crowd swaying- ‘Out of Time’, more associated with Chris Farlowe’s cover was the nearest to a surprise in the set.

‘You Can’t Always Get What You Want’ saw the first real singalong (too much so from an overly excitable group of South Americans near me who chanted football-style while I was trying to hear Mick’s between song chat) and though solos of any length are not really part of the Stones repertoire, Ronnie Wood’s was excellent.

Particularly praiseworthy is that while there are certain songs they have to play, the Stones vary the setlist from night to night and for diehards that went to other shows, including the first Hyde Park show, there were quite a few changes.

Cheekily thanking a Nobel Prize winner for writing a song for them, their cover of ‘Like A Rolling Stone’ was excellent while ‘You Got Me Rocking’ brought things relatively up to date in convincing fashion before one of those classics that could not be omitted in ‘Honky Tonk Women’. The piano contributions of Chuck Leavell on this was just one example of how this expanded live line up gives the songs added depth. 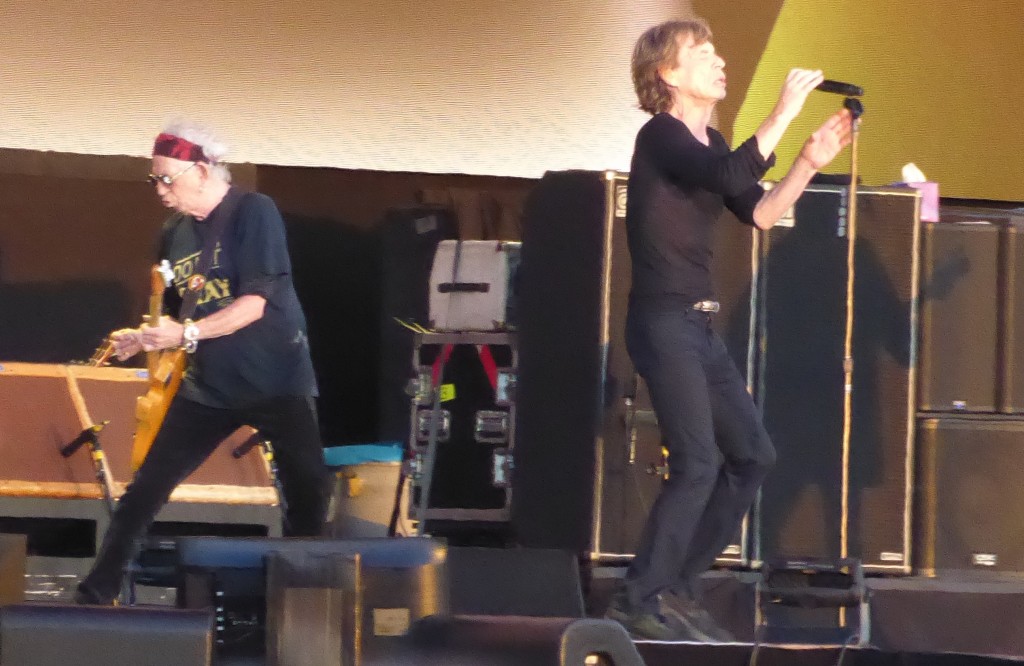 After each band member was called forward for their introduction, the last and loudest cheer was for Keith Richards, his weathered face seeming even more expressive and chracterful, even cartoonish, than usual.

With Mick taking his customary mid-set rest his ‘Glimmer Twin’ took on a couple of songs. ‘You Got the Silver’,  with he and Ronnie duetting on acoustic guitars, and ‘Happy’, accurately describing  his demeanour at this point-  with those characteristic interlocking guitars between him and Ronnie, in the latter’s case on lap steel.  He was also singing as well as I can remember, though I did get the impression over the set he was allowing his slightly younger guitar partner to do a lot of the heavy lifting.

On Mick’s return, the rest of the set was similar to those they have knocked off for the last 40 years,  beginning with an expanded ‘Miss You’ with funky danceable grooves and a jam that featured a solo slot from bassist Daryl Jones, then a burst of harmonica from Mick could only herald another nod to those R n B days in ‘Midnight Rambler’  and a long jam stopped and started several times.

After the eastern style guitar intro to ‘Paint it Black’, ‘Start Me Up’ was not quite as well received as expected, while I had the horrible thought that when it became the Stones last top 10 single, we were nearer then to the Second World War than to 2022.

A dramatic video backdrop including footage of the carnage in Ukraine only gave ‘Gimme Shelter’ an even more dystopian feel and there was a great vocal duet on the catwalk between Mick and Sasha Allen, then one of the very best of those unmistakable Richards riffs powered ‘Jumping Jack Flash’.

There was still time for a couple more classics for the encores, taking the set to over 2 hours. Another spectacular visual backdrop led into ‘Sympathy For The Devil’ whose ‘whoo-hoohs’ are made for a large audience like this and likewise ‘Satisfaction’, where the band jammed out taking the applause, is a song it is hard not to shout along raucously to. 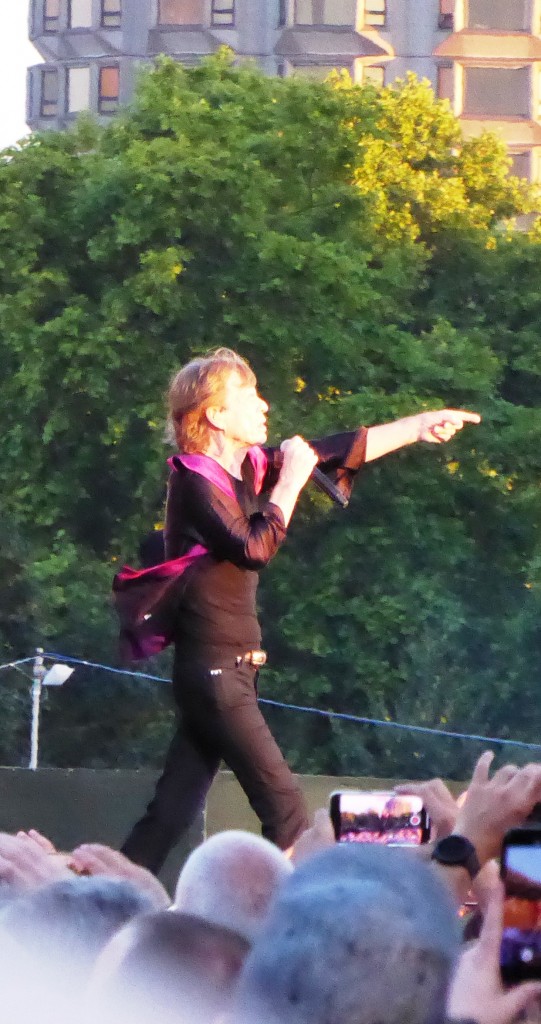 These are songs that will live on long after the rest of us are gone. Yet while my gig going summer has taken in farewells actual (Kiss and Whitesnake) or hinted at (the Eagles), there was no suggestion this might be – to coin a phrase – the last time. As long as their remaining core members maintain their remarkable vibrancy, there is no reason why the Stones cannot continue and even hit another milestone.