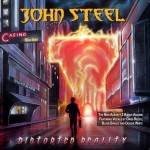 Effectively, the package backs up the release of Steel’s new album, Distorted Reality, w/David Reece (Pink Cream 69/Voodoo Circle) on vocals, with his two previous releases: Freedom (2014), with Blaze (Wolfsbane/Iron Maiden) Bailey, and Everything Or Nothing (2017) featuring Doogie (Rainbow/Alcatrazz/Tank) White.

This new stuff is captivatingly  like the old stuff, when Maiden, Saxon and other NWOBH behemoths strode the Heavy Metal stage like they owned it.

Any student of the genre will tell you that lyrically and thematically, Steel’s songs fall into the “chaotic” category of heavy metal writing, where the subject matter is dark and doomy, and is dominated by extremes… ‘War’, ‘Evil Sky’, ‘Nightmare’, ‘Rise From The Dead’, and so on.

With Readman, he’s got a vocalist who sings like he means it, without leaning on the crutch of howls and wails. He wrings maximum emotion out of weighty songs like ‘Messiah’s Day’ and ‘Fallen Angel’. His scorched voice emoting like he’s lived every moment, while behind him, Steel’s axework bites and stings.

It’s clean, coherent, streamlined metal, and that’s a point worth emphasising. Too often, heavy metal bands clutter things up with a narrative whose ambitions far outreach their collective grasp, or musical arrangements that suffocate the songs.

That said, often, what first seems simple isn’t. And the fact that major tracks like ‘Women Of Ice’ and ‘Dante’s Retribution’ take time to reveal themselves means they’re not immediately lovable. But it’s the effort required to get there that counts, and that in itself is a large part of the payoff. ****