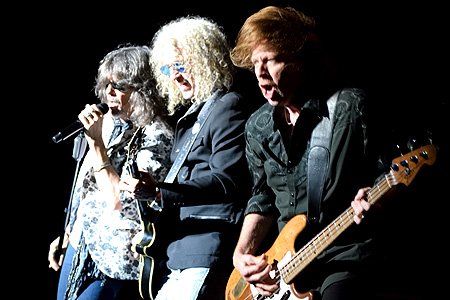 The Commoners release their latest album ‘Find A Better Way’ on November 4.

A live album and concert film of Creedence Clearwater Revival’s 1970 performance at London’s Royal Albert Hall is to be released through Craft Recordings on September 16.

Sandy Denny’s solo albums will be reissued on vinyl by Proper Records via BMG. The reissue campaign will begin with ‘The North Star Grass Man And The Ravens’ and ‘Sandy’ on September 23 with ‘Like An Old-Fashioned Waltz’ and ‘Rendezvous’ following on November 11.

On September 23, Niji Entertainment and BMG will re-release two live performances from Dio at the Monsters of Rock from 1983 and 1987.

Jeff Pilson revealed in a recent interview that Foreigner (pictured) are working on new music.

To celebrate the 50th anniversary of Rory Gallagher’s 1971 ‘Deuce‘ album from 1971, a deluxe CD boxset will be released by Universal Music on September 30.

The Mars Volta release their self-titled album on September 16 – their first new album in ten years.

Status Quo release a compilation, ‘Quo’ing In – The Best Of The Noughties’, on September 16 via earMUSIC.

Twister will release their new EP, ‘Only The Strong Survive’, on October 21 and will tour the same month giving fans the chance to watch an exclusive thirty minute acoustic set.

Former Curved Air violinist Darryl Way will release ‘The Rock Artist’s Progress’, a unique project that consists of a concept album and novel, on September 23. Marillion’s Steve Hogarth guests on one song.

Jeff Beck (US), Eagles (US), The Kings of Thrash – David Ellefson, Jeff Youbg & Chris Poland (US),

Whitesnake have pulled out of their upcoming US tour with Scorpions, who will continues with the planned tour dates with opener Thundermother.

Iron Maiden have been announced as one of Wacken’s headliners for next year.

The three day Rockin The Bowl festival based in Sheffield has been cancelled.

Weezer have cancelled their upcoming Broadway run due to low ticket sales.

Rage Against The Machine have cancelled their upcoming UK & European festival dates.

Bloodstock (Thursday 10-Sunday 13 August) have announced next year’s headliners for Friday – Killswitch Engage – and Sunday – Megadeth. Also appearing over the weekend are DevilDriver, Fit For An Autopsy, Knocked Loose & Decapitated.

Harry Scott Elliott is the new guitarist in Tyketto.

‘Gary Moore: The Official Biography’ is published on 27 September by Jawbone Press.

Lamont Dozier, a Motown songwriting legend. He helped craft early hits for the Supremes, the Isley Brothers and Four Tops