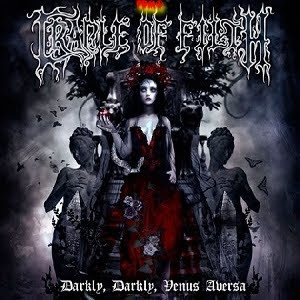 If somebody asked me to compile a list of the most influential Black Metal albums that came out back in 1994, that list will almost certainly include Darkthrone’s “Transylvanian Hunger”, Emperor’s “In The Nightside Eclipse” and Cradle Of Filth’s debut full length “The Principle Of Evil Made Flesh”. Even though all three bands have been through significant changes in terms of music direction throughout their career and though they have all been quite successful, it is Cradle Of Filth which managed to ‘break through’ to the mainstream, much to the dismay of a certain part of their old-school fan base. That is why leaving the ‘colossus’ of Roadrunner Records and signing a contract with cult label Peaceville has raised a few eyebrows! Anyhow, the fact remains that Dani Filth’s sextet is just about to release its ninth studio album entitled “Darkly, Darkly, Venus Aversa” – an album that fans of the Suffolk based outfit are ready to welcome with open arms.

Now, though I own every single album that this band has ever released, I never saw myself as a Cradle Of Filth fan, strange as this may sound? Why? Though I respect Dani and Co for constantly trying to progress as an outfit and though I believe that this band has not yet released a bad album, I have to admit that a) I am naturally attracted towards their earlier work and b) the last album that really blew my mind was released ten years ago – 2000’s “Midian”. Well, signing for Peaceville seems to have worked wonders for Cradle as “Darkly, Darkly, Venus Aversa” is, simply put, one hell of an album! This band has been fast throughout its career but not always heavy enough, so what this eleven track album has managed to achieve is to retain all those atmospheric dark elements featured in the band’s previous efforts and support them with massive/pompous riffs which can be described as both heavy and technically challenging. Also, by employing the services of Lucy Atkins, whose narrative style vocals combine with numerous epic-sounding orchestral and choral arrangements, “Darkly, Darkly, Venus Aversa” has achieved a level of quality that helps it treat the now legendary “Midian” as an equal – quite an achievement as far as I am concerned.

The album kicks off gloriously, with the seven minute opus entitled “The Cult Of Venus Aversa”. Following Lucy Atkins’ atmospheric narration, the listener will become exposed to an array of blast beats and crunchy guitar riffs which, in the song’s epic chorus/refrain, combine beautifully with some of the best orchestral and choral arrangements ever featured on a Cradle Of Filth album. The band seems to have become quite daring with regards time changes and rhythmical themes, as even straight forward compositions such as “One Foul Step From The Abyss” seem to hold quite a few surprises for those who will choose to invest in it. Thrash sound riffs combine perfectly with melodic piano/keyboard tunes in “The Nun With The Astral Habit” and the band’s love and admiration for Iron Maiden is clearly audible in “Retreat Of The Sacred Heart”. One of the songs that really spoke to me on many different levels is “The Persecution Song”, a five and a half minute opus whose mid guitar melody is reminiscent of mid-90s Rotting Christ, followed closely by the more My Dying Bride orientated “Deceiving Eyes”. “Lilith Immaculate” is the most commercially-orientated composition of the album but is still quite charming and enjoyable, creating a nice antithesis with the monstrous mid tempo riffs of “The Spawn Of Love And War”. “Harlot On A Pedestal” is a composition whose rhythmical patterns are ever changing, much different from the more melodic and straight forward “Forgive Me Father (I have Sinned). However, none of these can compare with the closing seven minute opus “Beyond The Eleventh Hour” – another long composition filled with beautifully-crafted choral and orchestral arrangements and featuring some of Dani’s most spiteful lyrics to date.

“Darkly, Darkly, Venus Aversa” is the kind of album that will impress you from the very first spin but will only really prove its worth after several spins – something that will not be too difficult to do seeing as there is an underlying theme that perfectly connects these eleven songs and which makes listening to it repeatedly a really enjoyable experience. Cradle Of Filth has created one hell of an album here, something that I honestly didn’t expect, and that is why I am genuinely excited. Investing in this album is a requirement not only for the fans of Cradle Of Filth but for fans of extreme metal in general and, if you want my humble opinion, better opt for the ‘fan pack edition’ as it is a lavishly crafted little gem with many extra goodies included.

This entry was posted in ALL POSTS, PURE METAL (All posts), Pure Metal/Album reviews. Bookmark the permalink.