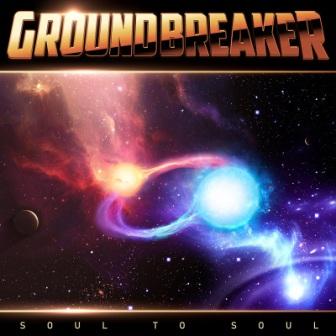 Groundbreaker’s debut album was a Frontiers Records project to reunite Steve Overland with the pure AOR sound of early FM. That was a collaboration with Work of Art’s Robert Sall, but  the latter is not part of this sophomore release, with the songwriting firmly in the hands of Alessandro Del Vecchio and other in house Frontiers songwriters- indeed the FM singer only has a joint writing credit on half of the songs.

The band name defies the Trade Descriptions Act and even more so as it follows the tried and tested format of the debut album.

Opener ‘Standing On The Edge Of A Broken Dream’ tells you what to expect with a classic eighties keyboards intro (is that a Fairlight?) and Steve’s singing his trademark ‘who-oah-oh’ not once but three times. Indeed it is almost is if he is a comic expected and guaranteed to get a laugh just by repeating a catchphrase. By about halfway through the first listen of the album I found myself doing the same as each song began, and more often than not proved to be correct.

On the plus side his soulful warble is in excellent form and, on many songs including the title track, with a wall of his own backing vocals supporting his lead. I’d always considered him as a cross between Paul Rodgers and Michael Bolton and on this album he is unafraid to draw comparisons with the AOR years of the housewife’s choice.

His version of ‘Carrie’ is a brave move but he carries it off in a way close to the original, if a little smoother. More controversial is ‘There’s No Tomorrow’ which in its both intro and chorus is MB’s ‘Can’t Turn It Off’ in all but name.

A generally light and keyboard-driven sound is however enhanced by some excellent guitar solos from Sven Larsson who has played on several West Coast Swedish releases, notably Street Talk which was a comparison I was reaching for more than once.

I found the ballads ‘Captain of Our Love’ and ‘Fighting for Love’ rather predictable while ‘It Don’t Get Better Than This’ was in fact no better than average.

Unusually the last three songs are among the strongest on the album in ‘When Lightning Strikes’, ‘Leap Of Faith’ and above all ‘Till The End Of Time’- it is always a good sign when the secondary chorus has an even bigger hook than the first one.

I must admit that I have become rather jaundiced by the never ending production line of such studio projects, and there is something less than satisfying about the ‘paint by numbers’ approach to creating them, with different parts recorded in different countries.

Nevertheless this was an enjoyable listen, right up my musical alley, which I have grown to like, and suspend such jaded cynicism. Recommended for anyone else who enjoys the purer side of AOR and is not bothered by that nagging feeling of familiarity.  ****