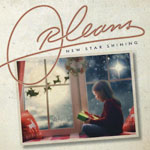 The 2021 Christmas offering from Orleans is something of a welcome surprise.  The band have existed in some shape or form since their glory days in the late 1970s on the Asylum label, although only founder member John Hall and bassist Lance Hoppen remain from the early line-up.  And now Hoppen has co-opted his sibling Lane on keyboards.

During their halcyon years they had radio-friendly U.S. hits with ‘Dance With Me’ and ‘Still The One’, the latter included on their best selling album ‘Waking And Dreaming’.  During this time their drummer was Jerry Marotta who later worked with Peter Gabriel.  Guitarist John Hall forged a career in U.S. politics from 2006 until 2012.

The band’s characteristic vocal harmonies remind at times of The Eagles.  Their quality from that earlier era is reflected in the title track, originally written for James Taylor and Ricky Scaggs in 1994.  It follows that very fine singer songwriter trajectory that existed in the 1970s with Reprise artists to the fore such as Joni Mitchell and Jackson Browne who was a label mate on Asylum.

Amonst those guesting on the album are Little Feat’s Bill Payne and John Jorgenson (The Hellecasters).

Overall Orleans are AOR, well represented by ‘Mary’s Christmas’ originally performed by Little River Band with whom Orleans played a fund-raising show and were suitably impressed with the song.  But this album is varied, and the band have largely plucked out a range of forgotten songs by lesser known artists, and rearranged in their own style.  To their credit there is only one “old chestnut”  (‘Winter Wonderland’ – an arrangement by the band’s co-founder the late Larry Hoppen) and if you want a sprinkling of fairy dust in your own seasonal mix, you’ve found it.  ***1/2