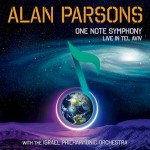 This was Alan Parsons and his travelling band’s fourth time gigging in Israel, enjoying the huge honour of appearing with the highly regarded Israeli Philharmonic Orchestra.

Frontiers signed Parsons 4 years ago, releasing his “solo” album, The Secret, in 2019 (featuring Lou Gramm, Mark Mikel and Jason Mraz). Weeks later, Parsons recorded The Never Ending Show live on stage in Utrecht, with regular sidemen, PJ Olsen, Todd Cooper, Jeff Kollman and others, only months before the Covid bug bit down hard. We reviewed the recording of that gig, in November last year.

Few rock bands get the opportunity to play on stage with The Israeli Philly.

This latest Live Show was recorded in sound and vision at Parson’s request. He knew that musically, it would be “an opportunity to incorporate songs his band wouldn’t otherwise do justice to live”.

Songs like ‘Silence And I’, from the Eye In The Sky album, and of course the title track, ‘One Note Symphony’, referring to the resonant frequency of the Universe (the Schumann frequency) is eerily reflective of his work with ‘Floyd, a restrained rock symphony, tightly constructed, evenly layered. The Orchestra gives it a symphonic dimension that fills the arena and motivates the audience into vocal appreciation.

The Tel Aviv set is not a million miles away from The Never Ending show’s play list. Again, Parsons represents a significant back catalogue through a series of tracks plucked from the past and the present, delivered to us on 2 CDs and a DVD.

All the “Hits” are here…’Sirius/Eye In The Sky’, ‘Games People Play’ and ‘Damned if I do’ also give key band members Kollman and Olsen the opportunity to strut their stuff.

The most notable addition is a six minute rendition of French composer Paul Dukas’s symphonic poem, ‘The Sorceror’s Apprentice’ (used in Fantasia, the movie). It was arranged and conducted by Tom Brooks, the band’s keyboard player, and seemed the perfect classical piece to be enjoyed on a warm summer evening.

Parson’s live albums are always an immersive experience. In this case, it was down to David Minasian and Trinity Houston, of IM3 Global, plus a team of local hires to stitch together the visual landscape to match the music. And of course to get the music mixed down with balance, clarity and oomph. ****1/2