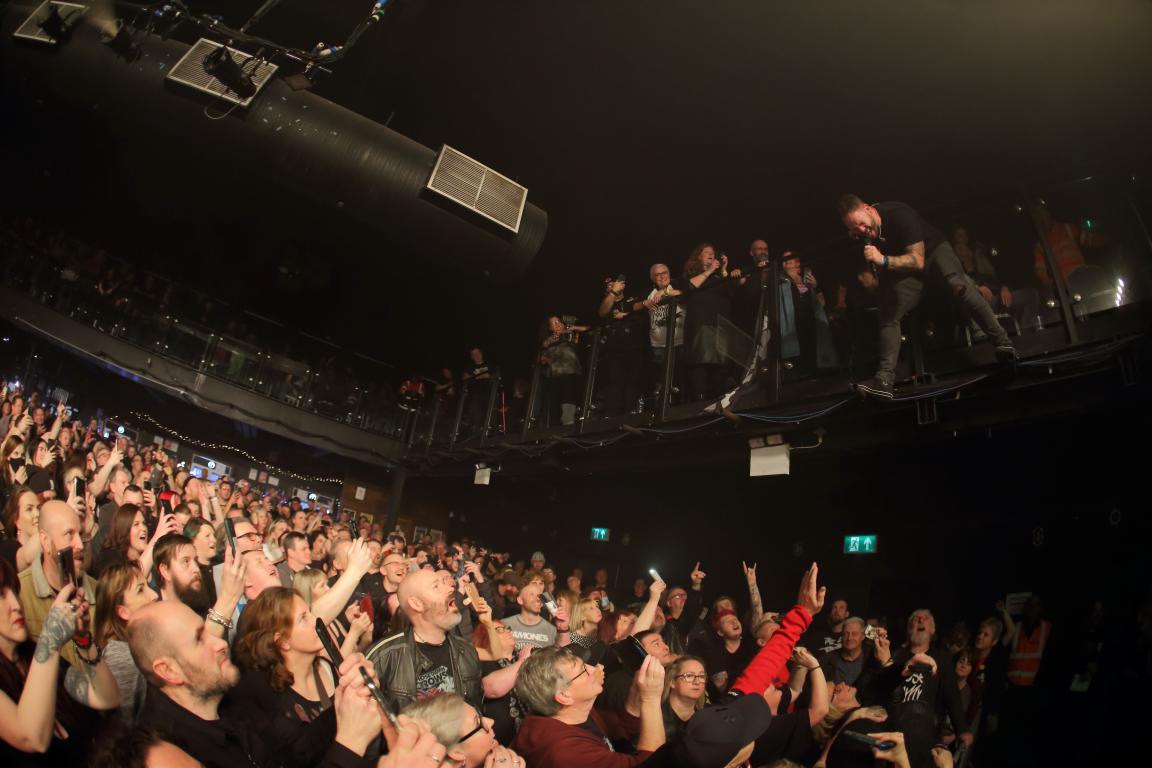 It has been a while since I reviewed a show, i believe it may have been the Steelhouse Away Day 1 with Bernie Marsden which was in 2019. We know why the 2nd one didn’t happen, and also put pay to the couple of rescheduled dates, so I will not try to bring up the C word or the P word.

Back when it should have happened this would have been the biggest headline show the Bridgend boys would have played at the time, it sold out quickly and the capacity is 1000, unfortunately that was surpassed last year in their triumph at Cardiff Castle .

For me the Castle show was the moment where they proved they have the material, and more importantly, the fan base (CROWFAMILY) to pull off the big show, with people travelling from all over the UK  to support them. 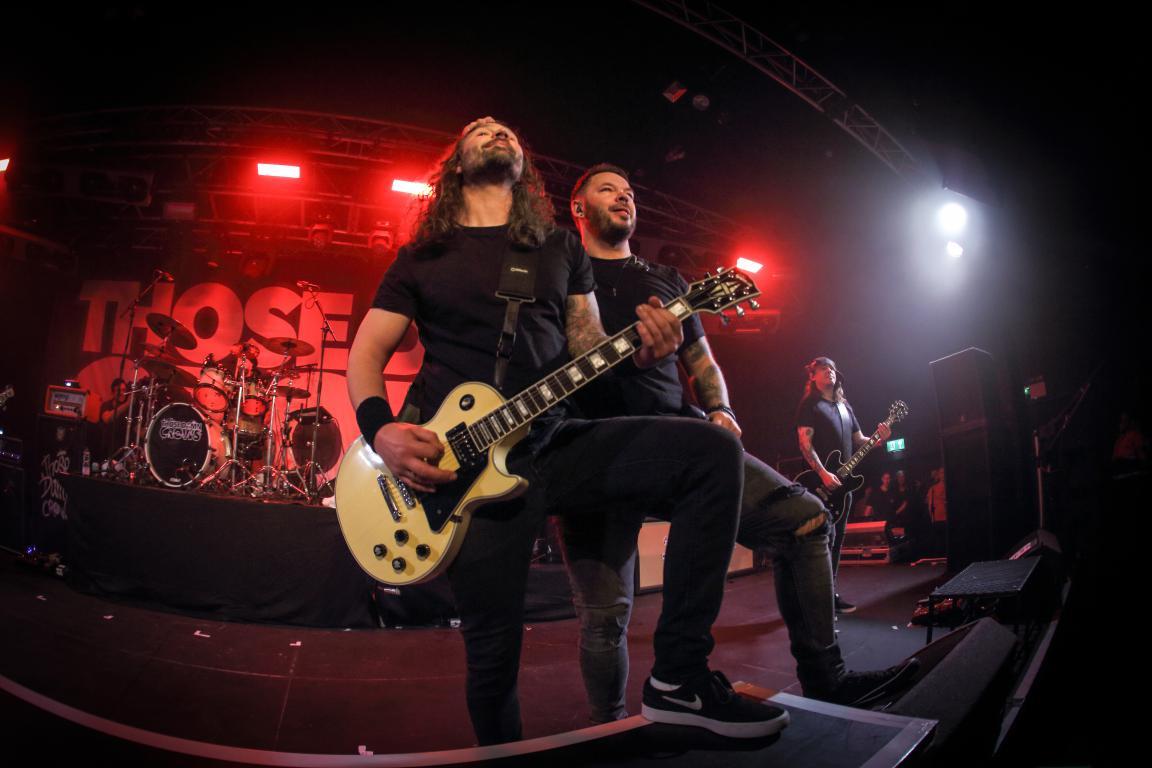 Those Damn Crows never really got a chance to promote the charting 2nd album ‘Point Of No Return’ having just come out before the dreaded lock downs. A Download slot main stage, and tour with The Dead Daisies in Europe, among other things, were cancelled.

They didn’t feel sorry for themselves though, they created their own live podcast, Crowcast, where they managed to pull a lot more fans in to the fold. They also released enough merchandise to put Gene Simmons to shame and, more importantly, kept their name out there while also being more accessible to the fans who tuned in every week. It was a bold and new marketing move a lot of whilst some of their contemporaries disappearing and starting from scratch once more ,so hats off to them. 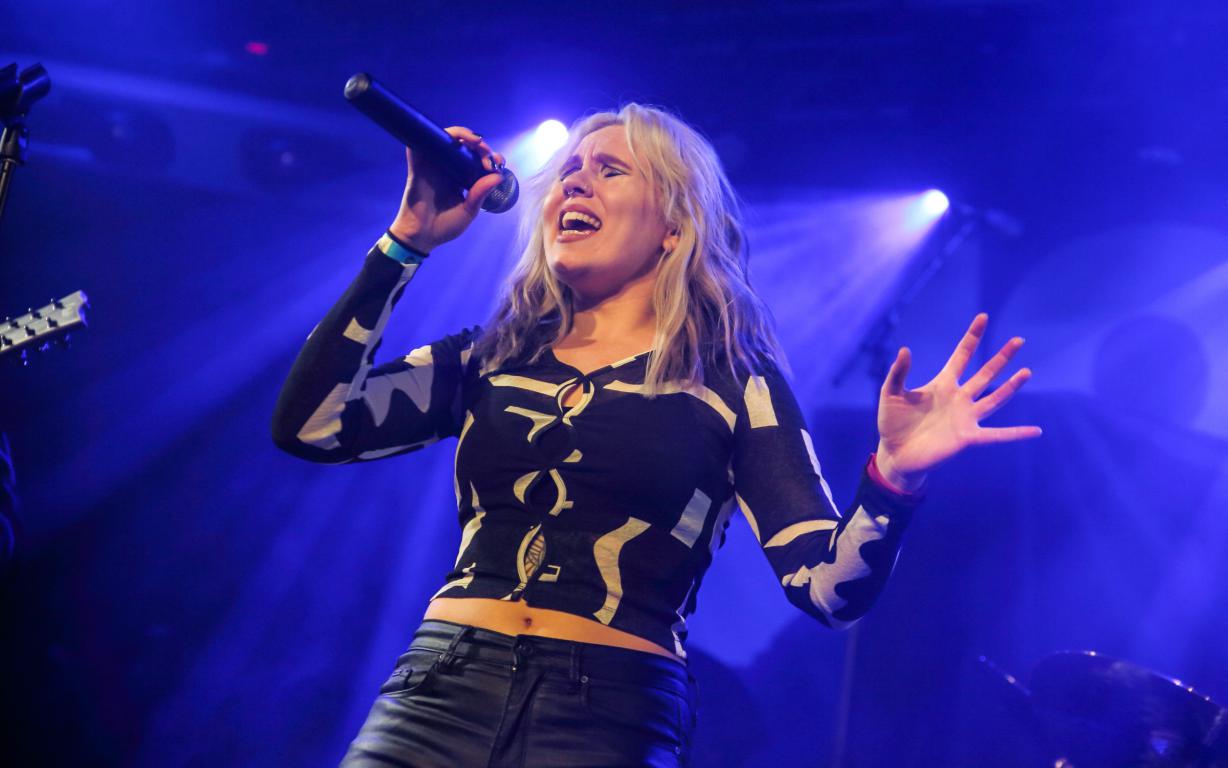 For this all Welsh affair Tribeless were given the opportunity to kick things off. Considering this was their biggest show to date they showed no signs of nerves facing a packed venue. Their 30 minute set was punchy and in your face, with their alternative rock style being very easy on the ears. For such a young band with a very engaging and visual vocalist in Lydia MacDonald, Tribeless appear to have all the pieces needed to progress quickly. 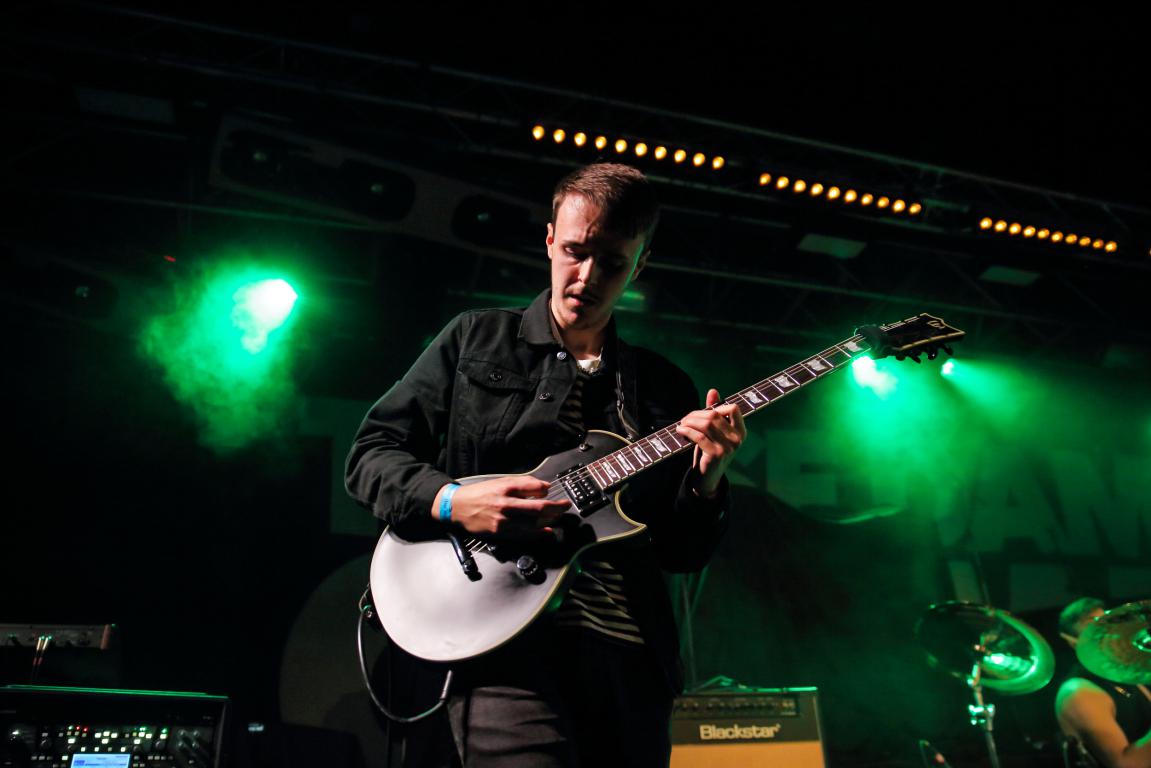 Being a Steelhouse production it wouldn’t be the same if Hand Of Dimes didn’t appear on the bill somewhere, and they looked so happy to be back on that stage. Welcomed onstage with a cheer usually reserved for a grand slam winning team, by a largely partisan crowd, Nev with his fist in the air feeding off the crowd. 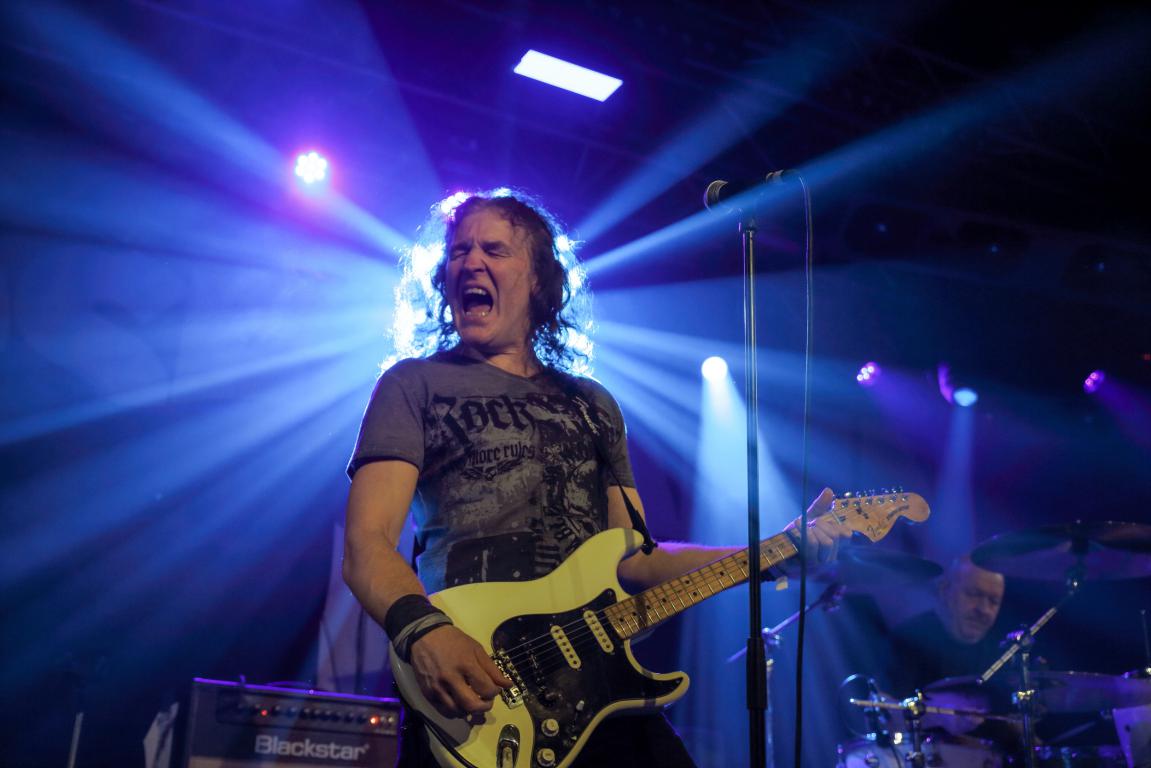 For the whole 50 minutes the crowd sang their hearts out along to pretty much their whole debut album. It would have been nice to hear a new song but maybe next time. ‘Looking At You’, ‘Pinstriped Arrogance’ and ‘Come The Hour’ set the energy levels running along with  a round the chanting of ‘Nev’. 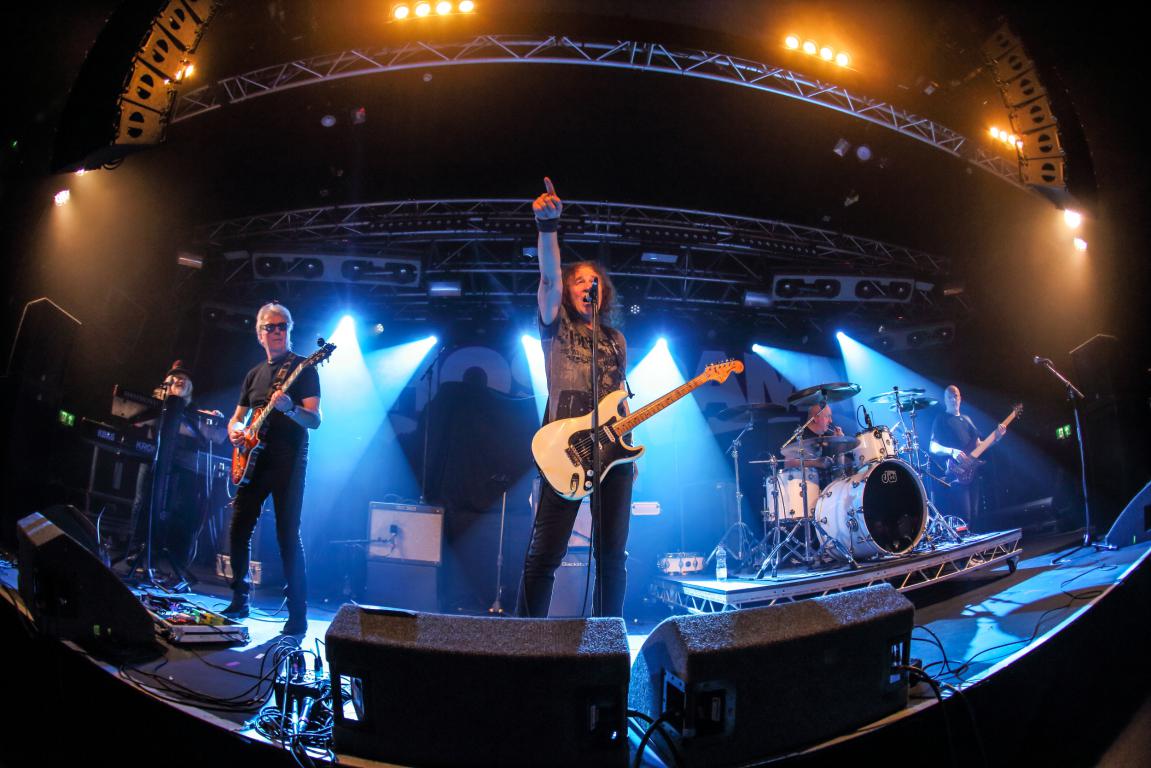 ‘Jacobs Ladder’ and ‘Angels and Demons’ gave us all a chance to hear that majestic voice in all its finery. I thought we may get a Kooga song thrown in for the Cardiff lot, but they opted instead for that other ace up their sleeve in Skins ‘House Of Love’. I could feel the floor moving as people were bouncing to this one! 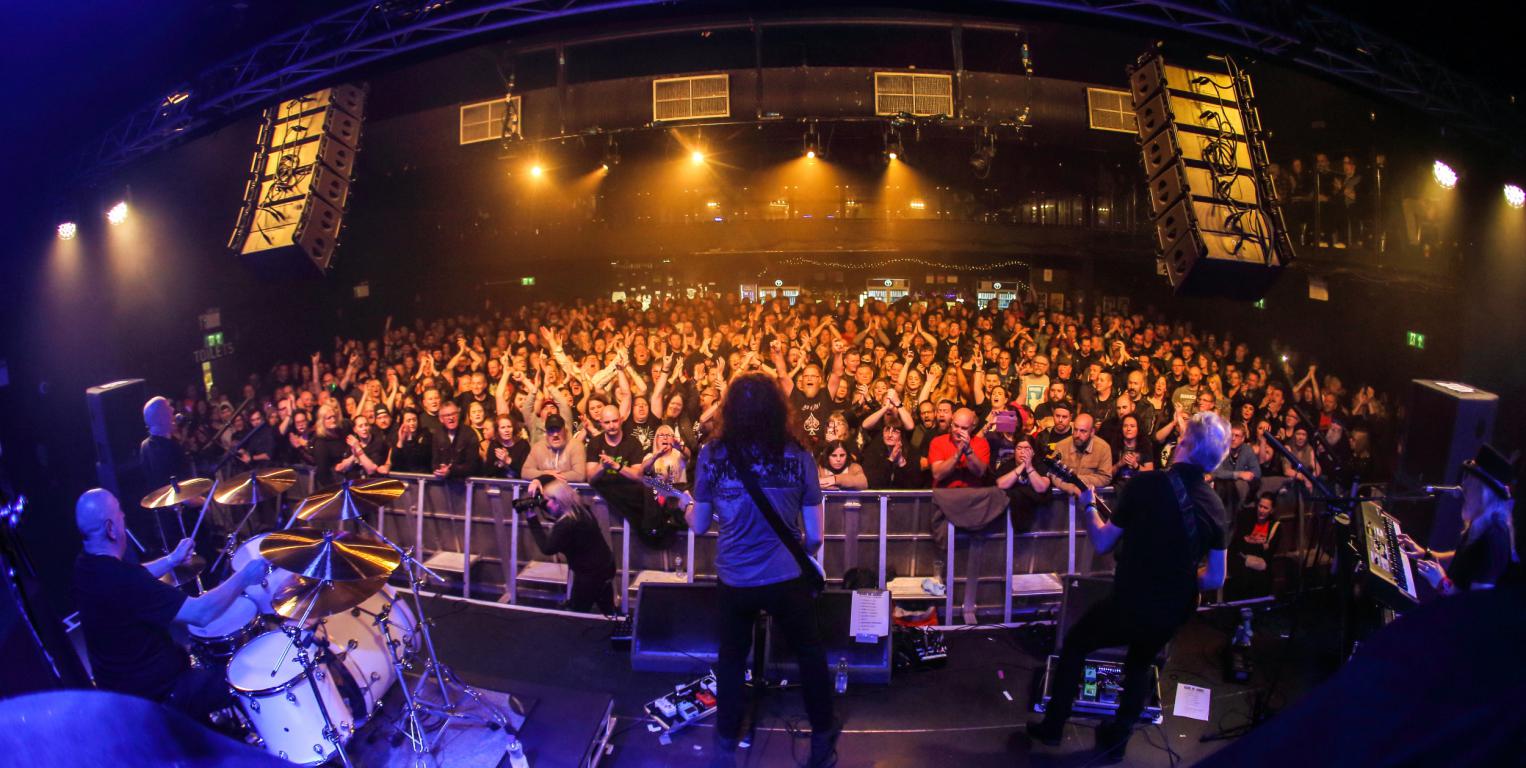 I have heard many people sing this song, one or two have done it well, some not, but no-one can do it like Nev does. Hand Of Dimes are not household names sadly, however the musicians are second to none and have been playing the circuit for years. They gel well together on stage , and always look like they enjoy it as much as the crowd.

A few years ago, I caught a show in the EVI Ebbw Vale maybe 2017, where Those Damn Crows played a small set. The headline band that night was Hand of Dimes, and watching from the side of the stage was none other than a couple of the Dimes boys, including Nev. He saw what a few others saw, a band that had that particular something – the X factor if you like – along with good songwriting, a hard work ethic. Relentless touring of the country honing their stage craft and delivering not just a gig, but a show. 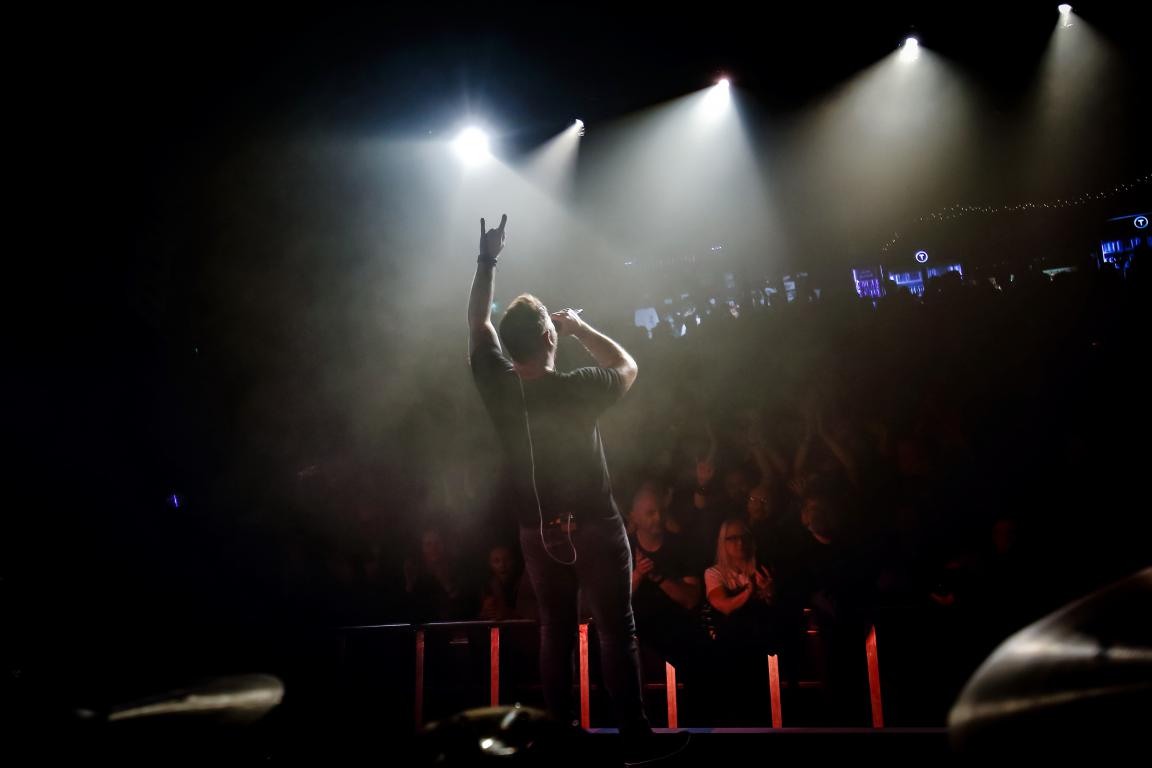 With the house lights down the crowd erupted, with Shane belting out ‘Cardiff, are you ready’…. they were more than ready! They had waited a long time for this and they were going to enjoy it. Tearing into ‘Who Did It’ with ‘Long Time Dead’ and ‘Don’t Give A Damn’ in quick succession. It sounded like Those Damn Crows were playing a touch faster, it could have be me, or them being out of practice.

Unpredictable is the best term to describe Shane Greenhall. If he isn’t prowling the stage like a caged tiger, he will be on the barrier getting among the crowd, you dare not take your eyes off him. He will turn up in the most unexpected places, during ‘’Set In Stone he usually goes for a wander , I don’t think he knows where he is going, especially if there is an air of danger about it. 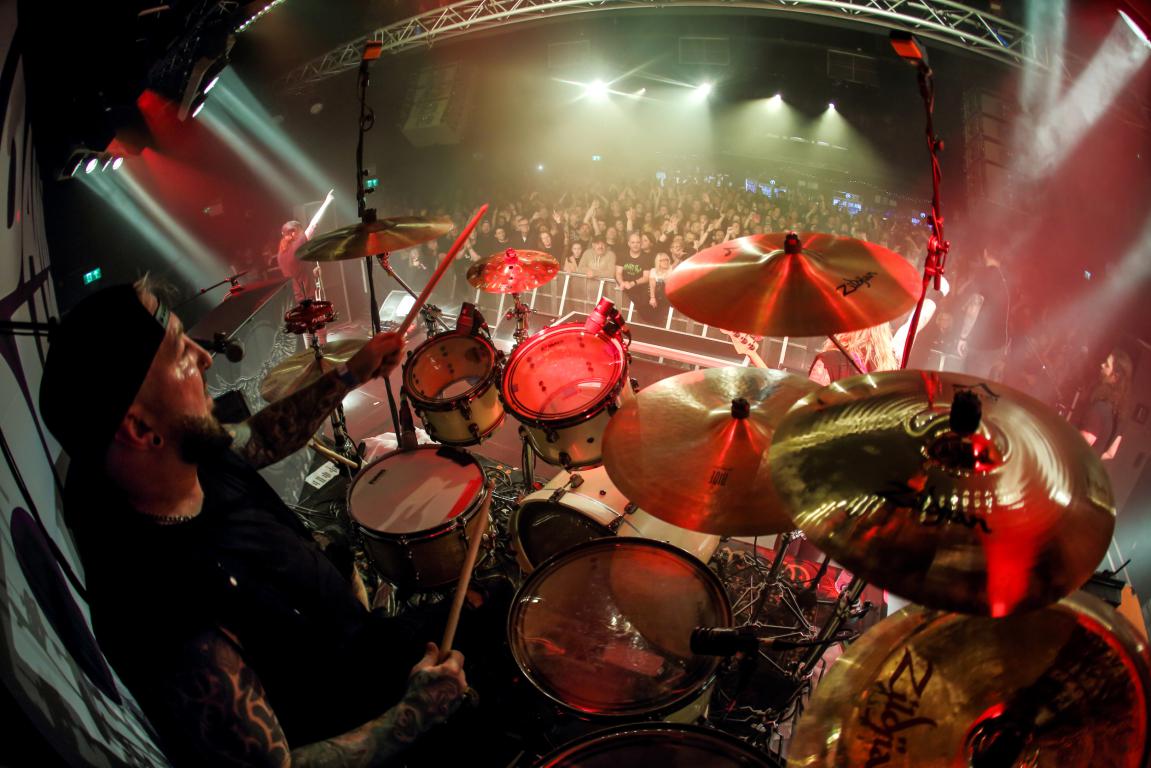 Tonight he raised the bar a little too high as he climbed over the upstairs balcony to address the floor crowd’ holding on by one hand. It was the dismount that had people taking a sudden breath though as he jumped off  the balcony onto the speaker stack side stage, before, finally, landing on the stage once more. 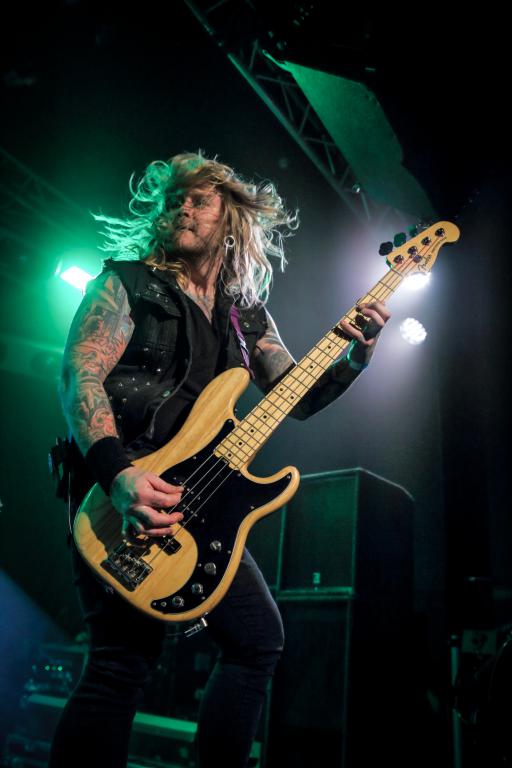 It isn’t just about the show or Shane, you have to have the songs to back it up and the other members to deliver them. Either side of the stage are two of the most understated guitarists, in Shiner and David Winchurch.  Both are more than happy to deliver the flesh of the songs with their gutterall riffs whilst rarely coming out of their respective corners.

The rhythm section of  Lloyd Wood (bass), with his encyclopaedic knowledge of rock poses, and little Ronnie Huxford, who can only be seen when standing up, drives the energy with his frenetic drumming. 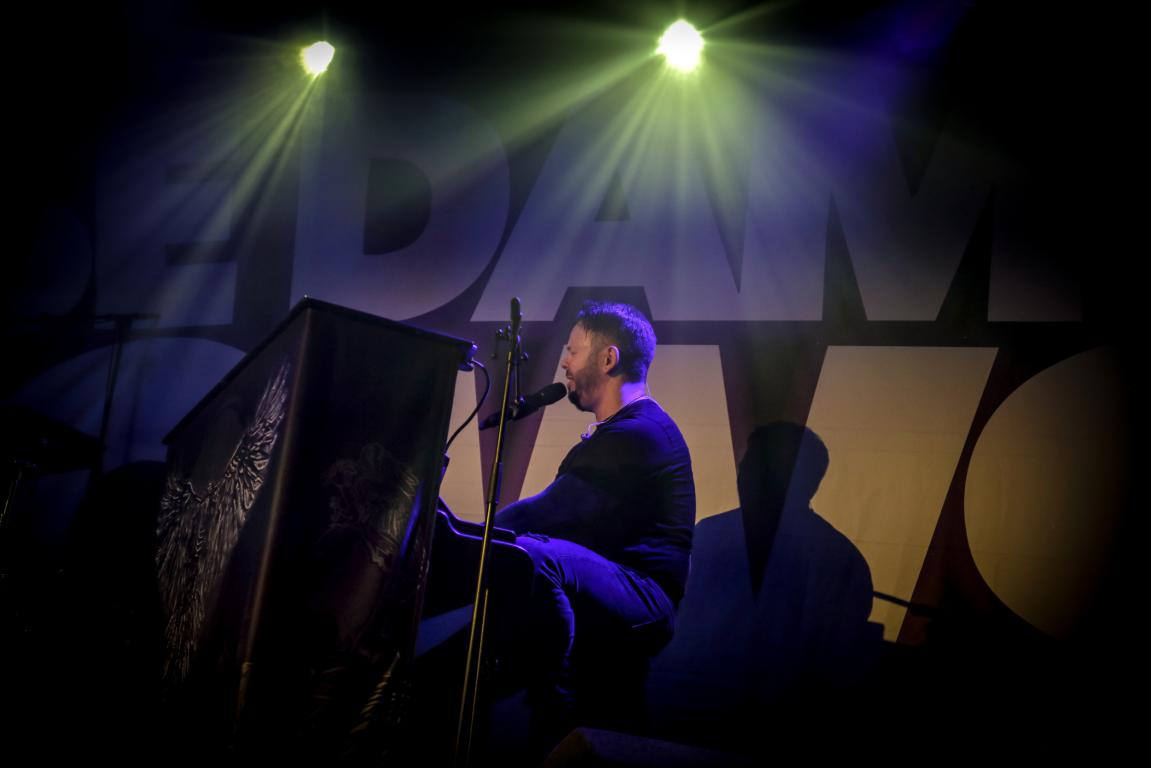 The Crows are not afraid to try something different  with an acoustic version of ‘Kingdom Of Dust’ and it has become the norm to see the piano onstage for their slower numbers. ‘Never Win’ and ‘Blink Of An Eye’, with just Shanes voice and the tinkling ivories ,  mean you get to hear the purity and emotion of that stunning voice and respectively the crowd don’t make a sound. People have their own meaning and associations to the lyrics in this song, and this version usually gets tears flowing from some. Blink is THE song that they could never really drop from the set. 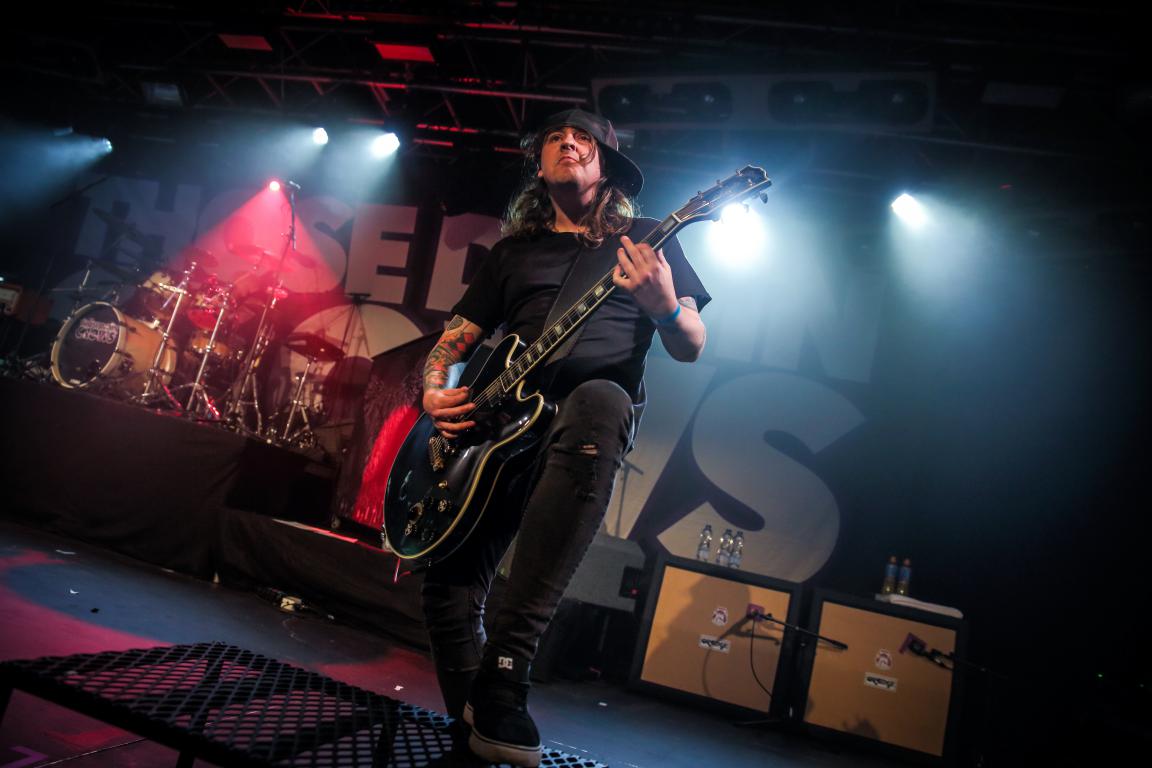 For me it is when they have the fire in their bellies and at full throttle you see the best of them, ‘Someone Someday’, ‘Set in Stone’ and ‘Sin On Skin’ are many fan favourites included tonight. The time seemed to go by so quick that their set closer,  ‘Rock n Roll Ain’t Dead’ almost sneaked up on us. However, it gave the crowd one more chance to join the band in a big sing along before Shane’s big jump signalled the end of a wonderful night.

Those Damn Crows have something special to sell, whether it be records, whiskey,beer, coffee or hot sauce. I think they have that aforementioned ‘X factor’ needed to sell out shows like this one and bigger. 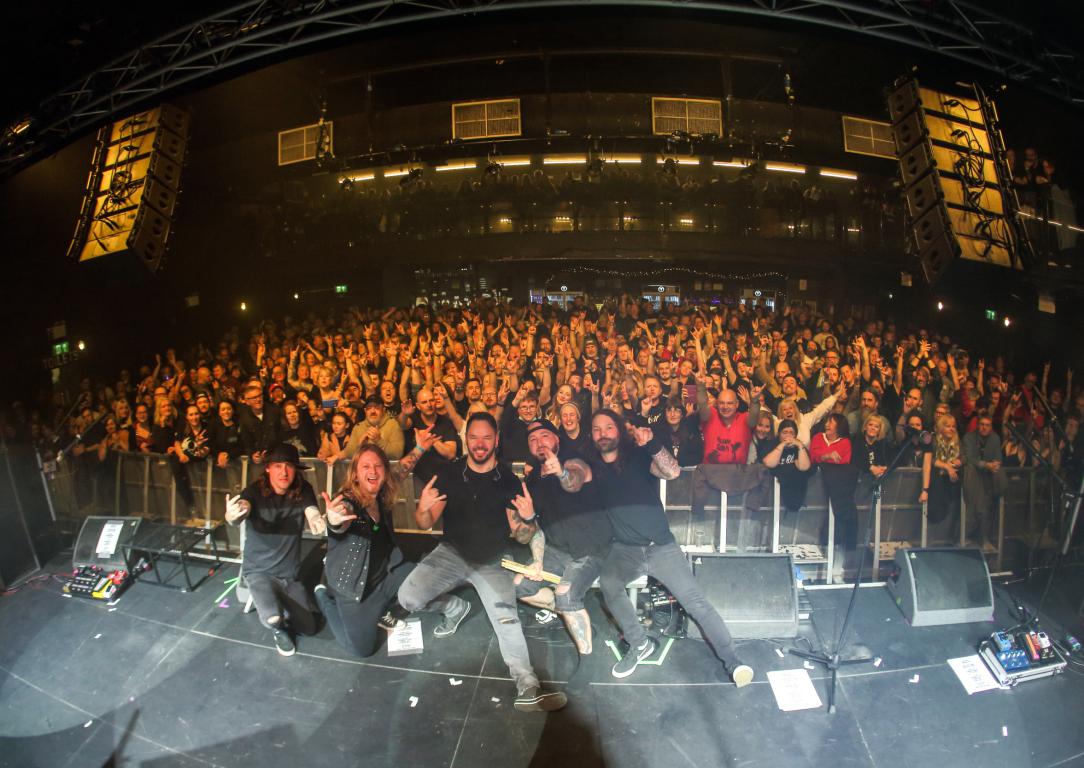