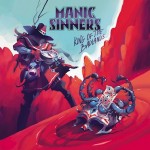 Manic Sinners are Frontiers’ first signing from Romania. They are a talented, hard rocking trio of multi-instrumentalists who’ve borrowed heavily from the past, (who hasn’t?).

If you’re going to borrow, borrow from the best. They’ve picked high calibre material as their template . . . Dokken, Von Groove, Dio, Blue Murder… and they’ve skilfully reshaped it in the image of their own hard rock sound, showing imagination and rock’n'roll nous at one and the same time.

Openers, ‘Drifters Union’ and ‘King Of The Badlands’ sit inside a heavy rock framework, two tightly structured songs packed with electrifying dynamic shifts and hugely imaginative ideas. The darkly symphonic keyboard sound on the title track, running under the riff like a deep water current, is a masterstroke of production and arrangement.

And still, at the core of this band’s sound is the melody.

From the hooky, AOR inclined ‘Anastasia’ and the more substantial melodic rock of ‘Million Miles’, both fluent and impressive, to the Lynch Mob-like ballad, ‘Ball And Chain’ and the hard as nails ‘Play To Lose’, where the mature grain of Avidiu Anton’s deliciously soulful vocals give the sentiments a lived-in feel. We’re in the company of a rock band on the rise.

All of the songs are illuminated by Toni Dijmarescu’s axework. There’s a precision and depth to his playing that is rare in a debut album. We wouldn’t be surprised to find that his next phonecall comes from David Coverdale.

Apart from the musicianship and high quality songwriting, Manic Sinners succeed in putting a fresh spin on long established heavy and hard rock tropes. And while they’re not exactly redefining the genre in any kind of radical way, they’ve found a style that’s grounded in the past, but shines brightly in the present. ****