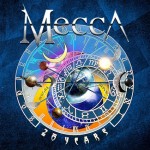 Mecca’s 20 Years bundles the band’s 3 albums, released over the last two decades, into an attractive package of original recordings, now remastered, with 5 bonus tracks spread across the 3 CDs.

The self titled debut was released at the beginning of the century to considerable acclaim from the music press and music fans alike.

It was the brainchild of Survivor’s Jim Peterik, who had mentored talented young vocalist Joe Vana, culminating in the formation of a studio band, which included luminaries of the Melodic Rock genre, Fergie Frederiksen, David Hungate and Mike Aquino.

Mecca (2002) : Albums with two different vocalists can be distracting, but Peterik, writing and producing, skilfully, and perhaps intuitively, matches Vana and Frederiksen to the material that best suits their vocal approach.
Frederiksen could easily have been fronting Survivor on the big, breathless choruses of ‘Velocitised’ and ‘Wishing Well’.

Vana’s sense of theatre comes through loud and clear on ‘Without You’ and the balladic, soft rocking ‘Silence Of The Heart’. Both stand out. He knows when to emote and when to scale it back.

Bonus track ‘Miss Chevious’s big brass and Hammond arrangement owes something to the Blood Sweat And Tears music of the sixties. An interesting bonus track, but not obviously accessible in the 2000s. ***1/2

The result was still obviously Melodic Rock, but this time there’s a greater sense of complexity in the music, confirming that the genre had evolved, lyrically at least.

‘Perfect World’ and ‘W2W’ are imbued with a sense of selflessness and heroism. They don’t always cut it lyrically, and they are not exactly deep dives into the space between order and chaos, but they have ambition and they break the surface.

Again stepping outside the AOR circle, if only a short distance, ‘Life’s Too Short’, a philosophical slice of Westcoast rock, and ‘Deceptive Cadence’, a moody, romantic ballad stand out.

‘How Many Times’, a jazzy, Toto-esque piece, is a genuine bonus track, confirmation, if any were needed, that the duo’s artistic ambitions were tied in with the greats of Eighties’ Melodic Rock. ****

This is glorious stuff, from the crystal clear production through to the vocals of Joe Vana. Given his vocal style and the fact two Toto members are involved in the music, it is not surprising the sound of that band is all over the sound, none more so than on two standout tracks – the blissful ‘Unknown’ – and on ‘Alone’ … the way this track builds up from the percussion, keys and handclaps to a rousing chorus is simply magnificent. This is how you do ballads, the ones that will stand the test of time.

West Coast fans will lap up the gentle refrains of ‘Gone’, and again you marvel at the musicianship and how new sounds reveal themselves after each listen.

Mecca again showed us how top quality melodic rock is done, and then some. The (bonus) remixes of ‘Unknown’ and ‘Alone’ are further, emphatic reminders. ****