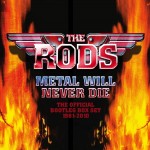 Metal Will Never Die is an understandable assertion from The Rods, a band who’ve survived multiple assaults on their place in the genre’s popularity over the last 40 years.

The band, a trio, consisted of David Feinstein, Carl Canedy and Steven Starmer.

Like Heavy Metal magic, they whipped up an enormous, intense sound that seemed to emanate from a lot more than three musicians.

This“Official Bootleg Boxset” compiles several notable live performances, none of them set up for audio fidelity, balance or clarity. But what the hell, this is what The Rods do best, raw, unadulterated hard rock/heavy metal.

As you can see, a huge jump through time from the first two CDs to CD3 and 4.

CD1: Live In El Paso saw the band treading the boards in support of their self titled 1980 debut album, and ‘Full Throttle’, the 1981 EP follow up. That title is as good a summary comment on the band’s on stage attitude as you’ll get.

‘Angels Never Run’, ‘Crank It Up’ and ‘Too Hot To Stop’ are the tracks where it’s easiest to imagine the band as a barely controlled eighteen wheeler, careering down the heavy metal highway, leaking oil, radio turned up to 11, daring anyone to get in the way.

CD2: The debut album made a decent Atlantic crossing, creating a surprise impact on UK shores and a favourable impression on the music press. This led directly to a support gig on Iron Maiden’s “Beast On The Road” UK tour in 1982.

Live In Portsmouth 1982 is a recording of that gig.

As you would expect, there are several repeats, trackwise, from the first CD. But nothing really prepares you for the way in which the band distils metal down to its base elements. The motorised, bass heavy rhythms of the band’s heavy metal are shorn even of anything that looked like it might want to be a frill.

CD3 : It is 2009. The band had called it a day in 1986, and had now reformed, with bassist/vocalist, Gary Bordenaro replacing Steven Starmer.

They were still immensely popular on the European continent, and were invited to play Germany’s Live At Headbangers gig.

The intensity of The Rods’ live performance is an amazing thing. Less a metal band, more a force of nature, they blasted out a veritable cacophony of blissfully thunderous heavy metal, laden with hulking bruisers like ‘Get Ready To Rock’n’Roll’, ‘Born To Rock’ and ‘Violation’.

The fact that the music sometimes sounds like it was transferred from an audience member’s IPhone seems neither here or there. The band’s metal has a life of its own, a powerful pulse, and you never lose it.

CD4: Just prior to the release of new material with the Vengeance album, in 2011, the band went on stage, at home, playing Live in Cortland, New York. This was 2010.

It is an existential live recording, bathed in sweat, full of all the best bits from their previous existence, plus some trailers from the new recording sessions, presented with all the glorious rawness, realism and real talent that this band had in spades.

No question, This set is confirmation that The Rods are in their element when faced with a live audience. Energy levels rise, inspired moments abound.
The set is further energised by the inclusion of ‘Ride Free Or Die’, ‘Raise Some Hell’ and ‘I Just Wanna Rock’, the first 3 songs written for the new album.

As you might anticipate, the set closes with the magnificently apposite ‘Metal Will Never Die’, which is where we came in. ****