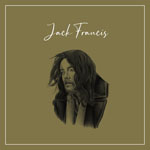 In introducing his remarkably lean and confident debut album, Jack Francis manages to namecheck Bruce Springsteen, and without realising it, Paul McCartney.

There are echoes of ‘Yesterday’ in his story that the song, ‘Helena’, popped into his head in one seamless package . . . lyrics, chords, chorus . . . during a dream one night. Springsteen sat outside his house and sang it to him. Cool.

He woke next morning and wrote it all down. Done.

We have no doubt it’s all true. But even if it isn’t, it’s a great story. He should write a song about it.

Francis, an Englishman in Americana, writes songs that evoke the confessional blues and the plaintive country rock music of days gone by. Confessional in the sense he claims he’s not complete without the love of a good, good woman. ‘Driftwood’ as his voice breaks down, and ‘Cold Hearted Little Man’ is this notion at its most stark… “Alone I Won’t Survive”. The album is full of those brief, glorious moments of poetic self awareness.

None of the songs on the album could be described as a ballad. Just heartfelt, unhurried songs, rising to choruses backed up by a gospel choir…like on ‘A Little Love’ and ‘Wild Eyes’, two of many where the acoustic and electric mix of guitars are tracked by a Hammond Organ, like a friend playing catchup.

And while ‘Helena’ and ‘A Little Love’ have been getting the BBC radio airplay, it’s fair to say that ‘Holiday’ is the album’s big song. It creates the biggest ripple in a flow of slow moving admissions, as Francis expresses his love for an unamed woman. There’s a sadness in the song too, but it’s incredibly strong, very mellow. The way a love song should be.

All through the album, Francis seems to be drawing from a well of hard won self knowledge. Even when his grainy, lived-in vocals tackle the jaunty, amusing ‘Silver Lining’, he ultimately concludes that for every artist ambitious to make it, reality eventually bites … “when you’re flat broke, nobody will give you the time of day’, and decisions have to be made.

This album should change all that. ****