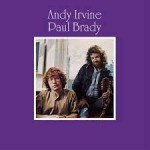 Andy Irvine/Paul Brady is an album recorded by Andy Irvine and Paul Brady when they formed a duo, after Planxty broke up for the first time in 1975.

For this recording they were joined by fellow Planxty band member Dónal Lunny (producer, bouzouki) and Kevin Burke (fiddle) – both of whom were members of the Bothy Band at the time. The album was recorded in 1976 at Rockfield Studios, used b.

The album has iconic status in Irish folk music with Bob Dylan (who recorded Paul Brady’s arrangement of ‘Arthur McBride And The Sergeant’), Bono, Liam O’Maonlai (Hothouse Flowers), and Mary Chapin Carpenter all citing the album as musical milestone.

This 2022 special edition CD and LP includes the first time since the 1970s that an LP version has been pressed. Both formats include an essay  by  noted  music  journalist Gareth  Murphy which tells the fascinating story of how the record came together and includes brand new interviews with Andy Irvine, Paul Brady, Dónal Lunny and Kevin Burke.

‘Arthur McBride and the Sergeant’ is an anti-war song where Arthur McBride and his cousin put paid to the recruiting sergeant’s ideas of enlisting them. It also features a fine vocal performance by Paul Brady. This song encapsulate what makes this such a classic folk album, with traditional tales/songs given a reworking at the hands of two experienced folk musicians.

Andy Irvine’s stand out is his singing on the beautiful ‘Autumn Gold’, a wistful piece that still sounds fresh and relevant today.

If you want to sample classic Irish folk of the 1970s this is the place to start, or if you already know this album well, this re-issue package is well worth owning. ****