Darren Wharton chatted to Get Ready to ROCK! Radio about his career and Dare. The two hour special includes tracks from each of Dare’s studio albums.  First broadcast 10 April 2022. 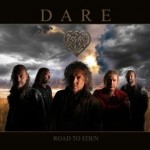 Back in the late eighties and early nineties, Dare – fronted by Thin Lizzy keyboard player Darren Wharton and with the nation’s favourite scientist Brian Cox an early member – threatened to hit the big time with their AOR tastic debut ‘Out Of The Silence’ and the controversial heavier second  ‘Blood From Stone’.

That they fell apart without realising that potential was a big disappointment to fans, myself included, but Darren Wharton resumed the band, albeit pursuing a mellower sound influenced by traditional celtic music. The new direction had its fans, but for me things weren’t the same.

But since reuniting with guitarist Vinny Burns, as well as bassist Nigel Clutterbuck, both their most recent new album ‘Sacred Ground’ (back in 2016!) and live performances hinted at a return to vintage Dare. ‘Road To Eden’ opens in superb fashion with ‘Born In The Storm’ and releasing it as the lead off single makes a real statement as it boasts a strong riff and vintage solo from Vinny Burns and is pitched in musical terms somewhere between the first two albums.

Actually it is easily the rockiest number on show and ‘Cradle To The Grave’ is more mid tempo with a very celtic backing even in the guitar solo while the tastefulness of the guitar melodies carry ‘Fire Never Fades’ . The title track is a piano led, mid paced anthem with that celtic touch and ‘Lovers And Friends’ a ballad.

They may be mellow listening, but there is something warm and comforting about Darren’s whispered tones, which have not changed a jot throughout his career, and are quite like nothing else in the melodic rock world.

He is also king of the ‘bromance’ and ‘Only The Good Die Young’, possibly directed at the memory of Phil Lynott and/or Gary Moore with its atmospheric piano and a Springsteen esque, anthemic feel is probably my favourite on the album. ‘Grace’ is another mid tempo  one with bagpipes adding to the celtic feel and ‘I Always Will’ could have sat comfortably on ‘Out Of The Silence’.

The final two tracks ‘The Devil Rides Tonight’ and ‘Thy Kingdom Come’ both begin gently and wind up as rockers  with Vinny let off the leash somewhat after playing with tasteful restraint for much of the album.

Though it would be unreasonable to expect a full return to their original style, this nice blend of classic and newer Dare is a perfect representation of where they are in 2022, setting them up nicely for the extensive autumn tour which will hopefully bring their profile back up to where it should be.  **** 1/4