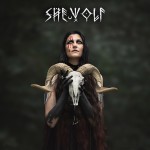 Aiming to climb the Power Metal mountain, SheWolf release their self titled debut album this month.

Led by stunning Greek vocalist, Angel Wolf-Black, the band, The Hunter (guitars), The Predator (bass) and Alpha (drummer) might sound like a bunch of characters from a Hollywood movie franchise, but in fact the band’s music is steeped in Greek mythology.

Specifically, “The Gathering Of The Wolves”, linked to the goddess, Selene, who kicked major ass (allegedly).

It’s billed as Power Metal, but there are elements of Prog and Folk swirling around in the music’s DNA, it’s a shape shifting sound that’s impossible to pin down.

In between the overlapping genres, as on ‘The One You Feed’ and ‘Safe In The Dark, you will hear flutes and folklore merging with a classy Nightwish influence. And further on, the majestic song structures and forceful melodies of ‘Nothing Is Forever’ and ‘The Thrill Of The Chase’ suggest the band and writers listened to a lot of Within Temptation during their formative years.

That’s largely down to producer/writers Michele Guiatoli and Marco Pastorino, who have created an immersive, sometimes familiar, listening experience.

‘Home’ and ‘Lone Wolf’ are the biggies. Lyrically, the first is grounded in the real world. It’s full of sadness and alienation. The song’s music understands and conveys these sentiments. As a Greek citizen stranded in the UK during Pandemic lockdowns, Wolf-Black had reason to feel homesick, and she’s expressed her emotions in the words of this standout song.

The second, ‘Lone Wolf’, a Euro-Metal Battle Hymn, is best listened to while watching the video that accompanied the single release. The band may look like extras from “Wrong Turn”, but the music they’re delivering … melodic and majestic … swoops and soars around Wolf-Black’s powerful vocals. Her resilient mezzo soprano easily copes with the song’s musical range and indeed her singing seems effortless.

As with so many metal albums, once you get beyond the mythological elements you’re able to see the real band. This one looks good, and worth watching. ***1/2