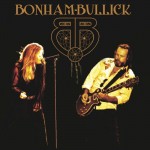 Vocalist Deborah Bonham and husband /guitarist Pete Bullick step out with a brand new band name (Bonham Bullick) and a self titled album with a shift in musical direction towards soul, with 13 interpretive covers on an American label.

In some ways it’s a curious move given that Deborah Bonham is best known for her singer- songwriter approach.  And yet the band’s timing could just be right. With the big upswing in soul in the last few years, this album might just be in the right place at the right time to make its mark.

It’s a soul based album with just enough rock and blues to satisfy the Bonham rock heritage.

Put simply there’s enough of Bonham’s excellent vocals and Pete Bullick’s subtle guitar tones and fiery solos to satisfy all palettes. And the change of stylistic emphasis gives them more subtle avenues in which to shine

It’s also an album that brings fresh impetus to Deborah’s vocals as she digs deep to make an emotional connection with the material.

The really impressive thing about this album is the way the band tackles covers from different decades and somehow makes them sound part of a coherent whole.

Bonham is also the producer and it makes a significant difference. Her intuitive overview finds the perfect balance between her own vocal range, Pete’s versatile guitar runs and some fine band interplay.

Her DIY approach works because of her familiarity with the band. She knows what everyone is capable of and channels that focus into supporting the songs.

The band tackles the hardest task first in trying to emulate the Bernard Fowler opener  ‘See You Again’, while adding something of their own.

Opening with Bullick’s solitary piercing note and levering into some impressive haunting tones, his imperious solo rises above portentous tom-toms and atmospheric bv’s to create the perfect platform for Bonham to deliver the kind of emotion and commitment that sparks the album as a whole.

They wisely opt for the booming blues-rock of Albert King’s ‘Can’t You See What You’re Doing To Me’, as the lead single. It’s full of bluster, a great vocal, exhilarating band interplay and is the closest they get to their previous style, with a big build up and a guitar-led resolution.

The album’s natural organic feel is again due to the way producer Bonham approaches everything like a pieces in a jigsaw. And with some judicious sequencing and attention to flow she achieves the difficult task of pulling together the disparate tracks.

The result is something slightly more than a slow burner, but with enough deep grooves, ethereal tones and eloquent phrasing to draw the listener in.

The choice of covers actually came from outside the band and the result is a soul based journey through rock, blues, gospel and some surprising eclecticism. The latter extends to a fine closing version of Chris Wilson’s ‘The Changeling’, the animated Ron Davies penned Bowie song ‘It Ain’t Easy’ and Steve Stills relaxed ‘Sit Yourself Down’.

There’s a similar Zeppelin feel on ‘When This World Comes To An End’, which features Bullick on mandolin and Marco Giovino’s beautiful drum pattern.

‘Bonham Bullick’ works well because of a sense of balance and stellar musical accompaniment.  This makes it something of surprise when Bonham opts for a laid back soulful approach to O.V. Wright’s ‘I Don’t Know Why’, when you might expect her to attack the song with gusto.

And yet, by singing within herself she cleverly places the emphasis on a considered rather than fiery vocal attack, flanked by Paul Brown’s cool organ sweeps and some muscular guitar work from Bullick.

By the time of the impressive ‘Trouble Blues’ you are hearing band who know how to tease  every drop of emotion out of a classic song.

Then there’s the Dobro led groove of I’ll Get Along’, on which Bonham’s voice lifts the song to new another level. As with the album as a whole, they let the song breathe and the instruments percolate, as guitarist Bullick and Paul Brown’s Hammond flesh out groove

Perhaps the only weak track in terms of  the flow and dynamics of the album is the country tinged ‘When It Don’t Come Easy, on which Baggott’s piano and Bonham extended phrasing makes the most of a MOR track.

Happily its juxtaposed by the more ballsy Allen Toussaint ‘What’d I Do Wrong’, an emotive song popularised by Betty Harris and one which Bonham makes all her own. The fade comes all too soon.

‘Bonham Bullick’ strikes a neat balance between accessibility and commerciality, while showcasing the talents of a very fine band. It’s the duo best yet album and soul inflected blues has never been in safer hands. ****