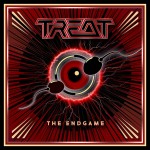 Here’s Treat again. The Endgame, produced by the talented Peter Mansson, is the band’s fourth album since their rebirth in 2006.

In the world of second and third generation melodic rock, only Harem Scarem, Leverage and Fair Warning can be mentioned in the same breath.

The album pivots on first single ‘Home Of The Brave’. It is hair raising, heroic music, driven by a heartstring-tugging undercurrent of melancholy. You can feel the spark ignite in your bloodstream, as Wikstrom’s guitarwork plays with classic celtic leitmotifs, firing up powerful emotions, leading directly into an uplifting, anthemic hook.

The track is bookended at the front end by ‘Freudian Slip’, ‘Rabbit Hole’ and ‘Sinbiosis’. All three are ripe, fully formed melodic rock songs, showing up the band to be as tight as the proverbial drum, collusive almost, powerfully conveying the majesty of their epic melodic rock pieces. These guys have been in each other’s company for so long that you would swear they must by now have developed some kind of musical telepathy.

‘Sinbiosis’, perhaps makes the most impression, catching the mood, creating a fresh sense of urgency as its tough as teak riffs and swirling rock crescendos stray way into melodic metal territory.

The tracks on the other side of ‘Home Of The Brave’ hold a consistent line, with ‘Both Ends Burning’, a huge, sweeping melodrama and ‘Parade’, a heart stopping power ballad, probably the picks.

The melodic rock genre may well not have returned to the mainstream, but a healthy market exists, especially throughout Europe. You would think that even bands like Treat would find it hard to stand out now.

Yet, The Endgame proves the competition’s got a long way to catch up. ****