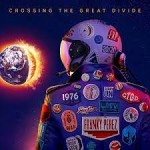 Singer-songwriter Franky Perez releases his fifth solo album. He has worked and toured with the likes of Slash, Scars On Broadway and Apocalyptica (for whom he is the band’s touring singer).

On this album Perez states that he returns to his roots to tell a story of self-transformation. “Every artist says, ‘This is my greatest album,’ but this truly was probably the best experience that I’ve had making an album, and the most honest,” says Perez.

Many songs were influenced by his cross-country motorcycle ride during lockdown that was filmed and where he met fellow musicians and friends including ZZ Top’s Billy Gibbons, Randy Travis and comedian Bill Burr.

Normally an album that covers so many musical touchpoints would be a hard sell as retailers and reviewers love a genre to place an album in. However, in this age where streaming is dominant you only need a song to gain traction in playlists, on a small screen series, etc. Franky Perez has these types of songs in spades on ‘Crossing The Great Divide’. There is the Latino pop of ‘Illumination’ – prefect for a summer’s day, the classy AOR/West Coast on ‘California 1976’ and a touch of the Roy Orbison soundscapes on ‘What Gives You The Right’. What an impressively crafted song that is.

‘90’s Love Song’ is a bright pop song that even has a touch of the Stone Roses/Manchester 90s sound contained in the funky vibe of the melody. Perez has a wonderfully smooth, melodic vocal that really does grab the listener’s attention. ‘The Great Divide’ is proof of that, a gentle melodic song and he can rock it up a little as the album’s opening song ‘When I Think Of You’. Shades of Peter Gabriel on this one.

An album to savour and enjoy, Franky Perez is right in that this is his greatest album. A personal tour de force (he played most of the instruments on here and produced it) that is one of 2022’s most pleasant musical surprises.  A year end ‘Best Of’ lists contender that’s for sure. ****1/2