First time on stage at the Oxford Playhouse for John Spiers and Jon Boden, and also the first time inside this smart theatre for this reviewer. Playing to a home crowd (Spiers and Boden met in Oxford) is always a tough one, however, they had the crowd on their side from the first song, ‘Butter, Cheese & All’ one of those tunes that is both humorous and can have many a meaning depending on the cleanliness or otherwise of the listener’s mind!

Much of tonight’s set came from last year’s ‘Fallow Ground’ album including ‘Bluey Brink’, the tale of an Australian sheep shearer who was partial to the odd drink. Jon Boden puts so much into this song, and indeed the whole night. Not to be outdone it was amazing how John Spiers knew which melodeon and squeeze box to play out of a range of seven. It was a marvel to watch both of them in full flight on fiddle and melodeon.

‘Hind Horn’ was introduced as a happy ending folk tale as a servant falls in love with the king’s daughter and a tale of magical rings, beggars and happy endings unfolds. The duo’s music really does mesmerize and transport you to a happier place. Same is true of the whaling song which Jon Boden told us was a nice one as it involved whaler’s going on holiday, as opposed to the usual songs about whaling being involving killing them.

After the interval both Spiers & Boden and the audience really hit their stride and my only complaint was it was over so soon. The instrumental pieces ‘Sloe Gin Set’ and ‘Giant’s Waltz/The Ironing Board Hornpipe’ were played at some pace, whist the duos own homages to each of their favourite hills ‘Bailey Hill/Wittenham Clumps’ off the ‘Fallow Ground’ album was another treat for us all.

‘Prickle Eye Bush’ saw the set into its home run and the Spiers & Boden version works well (Led Zeppelin did a version of this song as ‘Gallows Pole’). The second half of their set certainly had a livelier feel about it, possibly as both performers and audience were suitably refreshed?!

Bellowhead’s ‘New York Girls’ provided a raucous and fitting finale to a superb night of music performed by two of folk music’s most talented folk.

They are back in Oxford in November at the New Theatre for a sold out show with the rest of Bellowhead. Before then make sure you get along to one of their shows which are helping keep the spirit of traditional folk music alive and well. 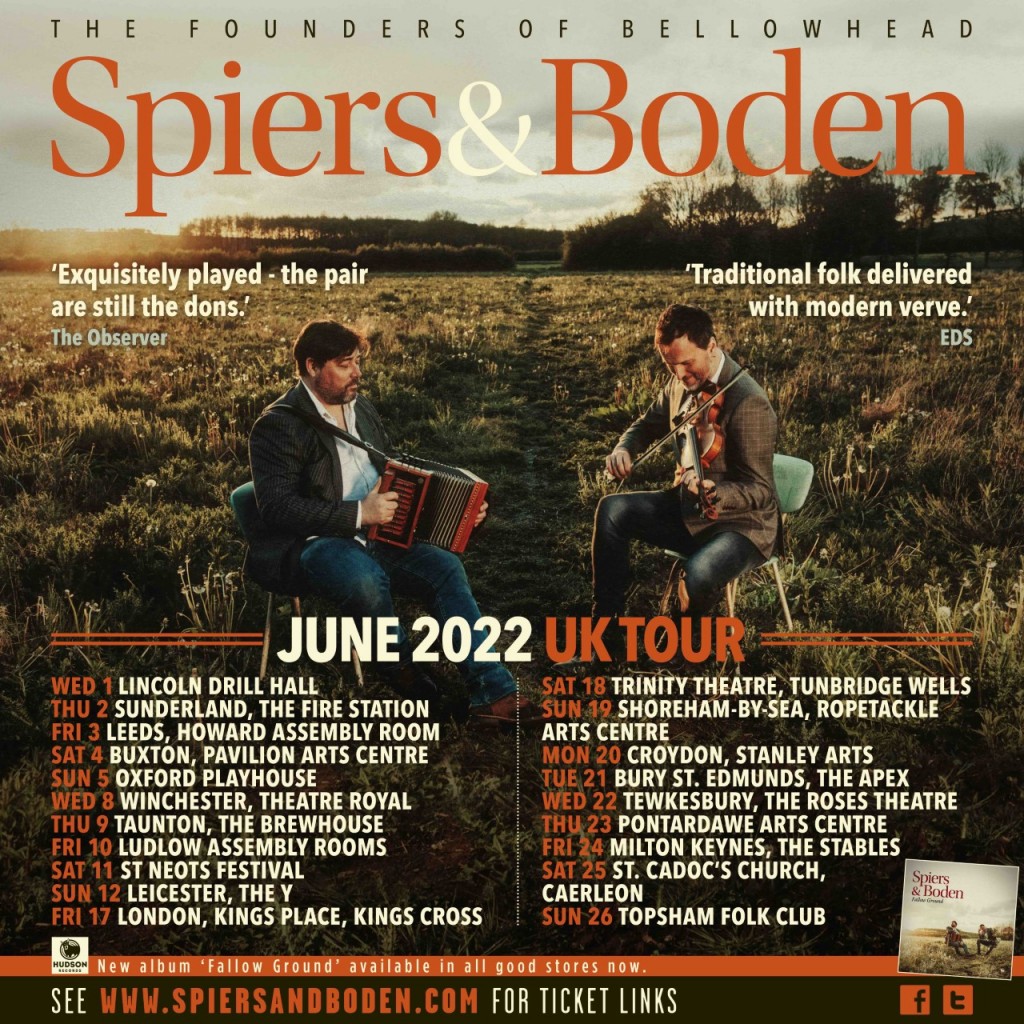