It may be hard to believe that Emerson, Lake & Palmer, progressive rock titans, actually produced singles and -  moreover – some became hits.

This splendid box set includes a dozen of them from around the world including such territories as Angola and Portugal.

There are a couple of singles from Japan including ‘Fanfare For The Common Man/Brain Salad Surgery’ and several from Germany. 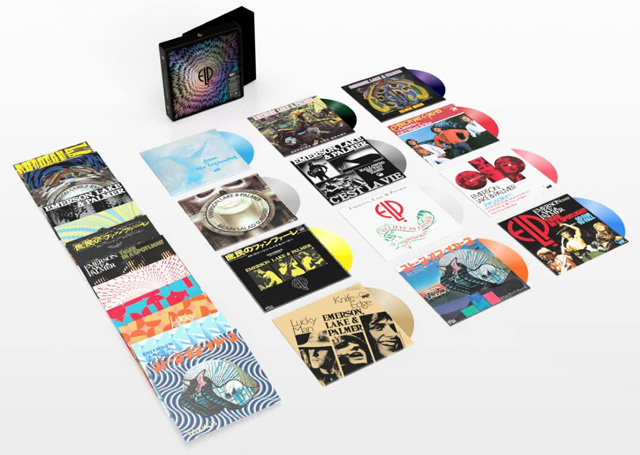 The band never consciously wrote for a single and what emerged was at the behest of their record label who were obviously happy to salvage three minutes with an eye on the charts.

‘Fanfare’ achieved their greatest single success, reaching No.2 in the UK, but their most successful single in terms of various countries was 1970′s ‘Lucky Man’.  Three years later ‘Jerusalem’ (here the Portuguese and U.S. release) was banned by the BBC scuppering useful airplay.  They considered it irreverent.

It was only in later life that the band went a bit AOR/commercial: the album ‘Love Beach’ (1978) is represented by the German single ”Canario/All I Want Is You’ whilst 1992′s ‘Black Moon’ yields two singles including ‘Affairs Of The Heart/Better Days’.

This box set will appeal to ELP die-hards and collectors who like a “nice item” to put on the shelf perhaps never to be played.  There is little duplication in the tracks and it does emphasise that the band were not all about pomp and prog excess.  It does stress however that arguably the band’s best work was done before 1973.

Housed in their original picture sleeves and on coloured vinyl, with art cards, liner note booklet, and foreword by Carl Palmer, it makes for an attractive collectors’ package.  *****

David Randall chatted to Carl Palmer in June 2018 coinciding with the release of the CD/DVD album ‘ELP Legacy Live’ in June 2018 (BMG).  With tracks from the live album, plus selections from ELP, Asia, and Atomic Rooster.