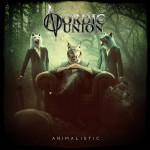 Atkins’ advanced form of lung cancer, diagnosed only 3 years ago, has clearly pushed him into creating some of his best work. His tremulous vocals are particularly striking on opener, ‘On This Day I Fight’, a rock’n'roll hymn to commitment and artistic durability that sets up the lyrical theme of the album.

That’s not to ignore Martenssen’s significant contribution in writing most of the material as well as producing, arranging and playing guitar here. The album’s tightly structured songs are primarily a product of his fertile musical mind, frequently crossing that invisible line between melodic hard rock and symphonic rock.

‘In Every Waking Hour’ and ‘If I Could Fly’ catch the mood, with both artists striking a sense of urgency, musically, vocally and lyrically, creating a psychological depth not usually heard in “popular” music.

And they know their audience.
The album is sprinkled with celtic flavoured guitar intros, mixed with densely textured choral contributions, adding depth to the material. Both those openers, plus other standouts, like ‘Wildfire’, ‘Last Man Alive’ and the title track, ‘Animalistic’, are melodic rock standard bearers. All of them carry a freshly unfurled flag of pulse quickening tunes and anthemic choruses, reminding us just where these two outstanding musicians came from.

And as you would expect, there’s a strong dramatic thread running through the album. ‘This Means War’ is a thick cut slice of metalised anti-war sentiments; ‘Scream’ roots for the underdog and the downtrodden, and ‘Riot’ aims to get all that mental turmoil out there before the shadows fall.

Martensson’s music understands and helps convey these sentiments, running side by side with Atkins’ vocal delivery, both adding to each song’s sense of defiance.
Melodic Rock with a message. ****