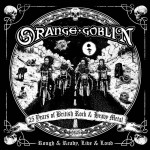 Counting back to 1995, Orange Goblin are a ten album band, whose latest live recording was available only as a digital release in 2020, due to the unforseen circumstance we call Covid.

Now it’ll be out in hard copy on 5 Nov (there’ll be fireworks that day etc etc). The album’s title – Rough And Ready, Live And Loud, 25 Years Of British and Heavy Metal – sounds more like a book launch than a CD release. Still, that said, the cliché, “does what it says on the tin” quickly swims into view.

The cover art is in black and white, and that somehow seems appropriate. This band’s Stoner/ Doom / Sludge Rock is a dark, monochrome world, occasionally illuminated by the fiery intensity of an amp blowing riff from guitarist Joe Hoare, or a howling mating call from vocalist, Ben Ward.

This timely release is spliced together from recordings of various live gigs over a 3 year period, 2016-2019. It selectively plunders 7 of the band’s albums. A live ‘best of…’ if you like.

The music press went into ecstasy overdrive when the band released 2012′s Eulogy For The Damned album, after a 5 year shutdown. The brutal, densely constructed, Blue Cheer like ‘The Fog’, and the steamrollering, combative heavy metal of ‘The Filthy And The Few’ are the picks from that album. Done live, they are indeed performance art, illustrating just why the primal thrill of Orange Goblin’s metal thrives on audience response.

The pair of tracks from 1998′s Time Travellers Blues quake with turbulent energy. Hoare’s explosive, bluesy riffs ignite the Sabbathy ‘Shine’, and Ward steps up and into to an outrageously rocking reconstruction of the the album’s title track.

The remaining tracks growl and thunder their way through the band’s heavy rock battlefield, knee deep in glaur, showing the occasional flicker of a harder, more dangerous edge.

Performance art indeed, from a band born to perform live. ****