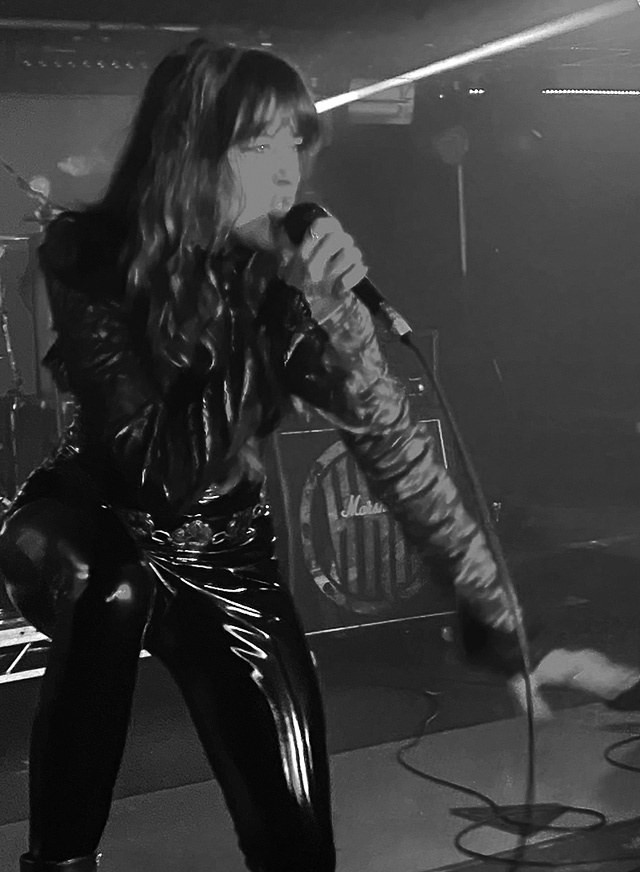 This festival is a new experience for me and what an utterly joyous experience it was too from the get go, arrival was smooth, the venue is really easy to navigate round, the facilities were kept to a good standard of cleanliness given the volume of traffic,  all the security staff were friendly and polite, and the weekend crew working in all the bars/food outlets were excellent – couldn’t fault them.

Unfortunately, I couldn’t get to HRH14 for Thursday night so my plan was to try and get round as many of the newer bands as I could on Days 2 and 3 but take advantage of some of the more familiar acts too – what a treat! 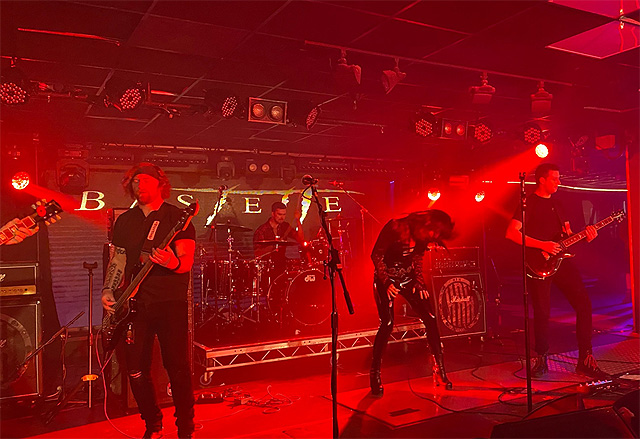 Friday’s line up for me started with the rather awesome Bastette on the main stage – they were on fire, and the place soon filled up as the band let rip and Caroline worked her magic on stage opening with ‘Talk About It’ and cracking through a packed set demonstrating their originality and range as well as including a cheeky Pink cover ‘Just Like a Pil’, this young band have it all, catch them before they start playing much bigger venues – you won’t be disappointed.

Followed by Yikes who were tight as a band but the vocals let them down, I decided to switch to Stage 2, catching the tail end of Gallows Circus, all I can say is I wish I could have heard their full live set if ‘Hell’s Whiskey’ is anything to go by – I will be checking you out at future gig. 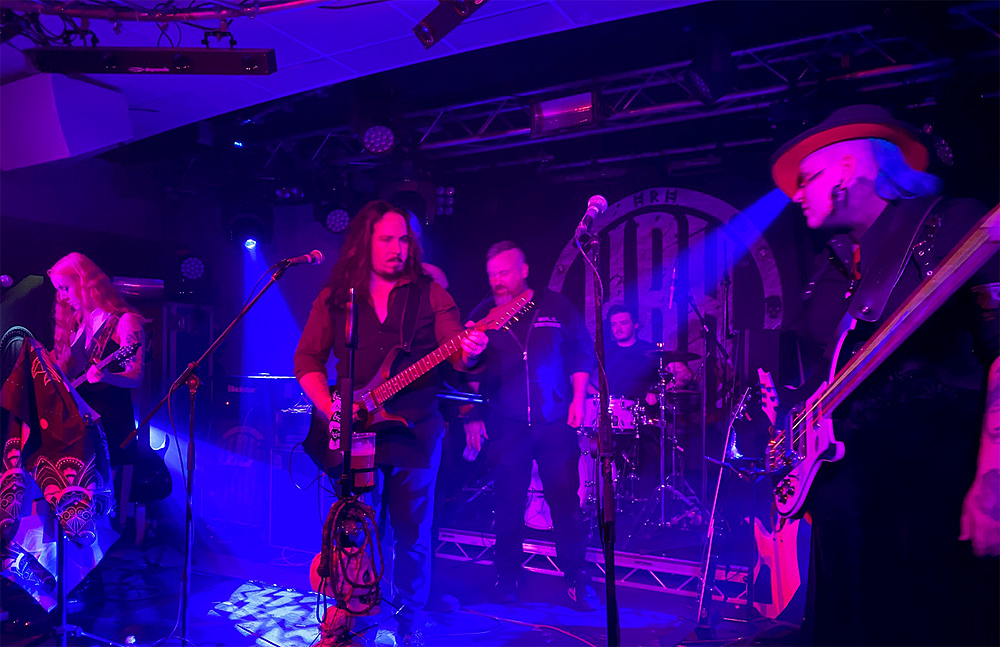 FyreSky started and Stage 2 filled up, with security having to turn people away, this set was a long time coming for this band and they were thoroughly enjoying themselves as were the crowd, chuck in the Time Warp and the crowd response was incredible – check them out if you haven’t already. Stand out set including ‘Star Chaser’, ‘Pleasure for Pain’ and ‘Toxic’.

Jimmy B and the Death Rattles were a joy to behold, tight, fun, funky set a complete change from, the band before, and less heavy more gravelly JD, rock –another excellent set, highlights ‘On my TV’, ‘We are Fire’ and ‘Monkey Head’.

Swedish rockers, Eternal Fear were next up, and did we know the Vikings had arrived from their opening track, ‘Post War Dream’ accomplished frantic guitars, heavy drums, that got a few pulses racing – most will have heard ‘Dream Stealer’ but stand out tracks for me were ‘Halls of Odin’ and ‘The Other Side’ – this is Viking metal and it rocks!

The Headliner on Stage 2 was The Fallen State, a band that have relatively recently changed their lead singer and recently completely there first tour with this line up – the band were in fine form, opening with ‘Knives’ swiftly followed by ‘For my Sorrow’ and their packed set managed to  incorporate their latest release ‘Standing Tall’  and the crowd pleasers of ‘Attitude’ and ‘Burn It To The Ground’ -  they were given a warm and rousing welcome by the crowd; what a way to complete Stage 2 for the day! The Fallen State are clearly going places – catch them on tour supporting Stone Broken in 2022, I will be.

The timing meant I could pop across to Stage 1 to catch the rest of Phil Campbell and the Bastard Sons’ set – they were on great form as you’d expect, rapturous crowd and tight delivery, so glad I caught the last few songs – how on earth is Saturday going to top day 2?

Saturday started with a vow to drink slightly less (ahem) … first band up for the day was Sons of Liberty, who got proceedings off to a great start with a tight set and demonstrated just why they are still relevant today, cracking start to proceedings on the Main Stage! 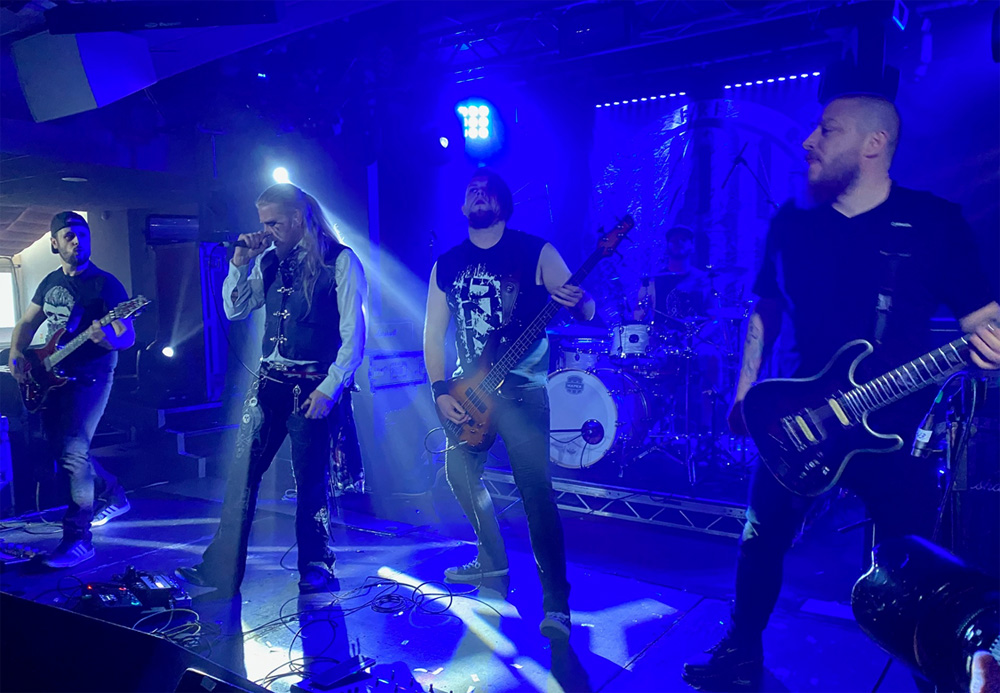 Next up on Stage 2 was Lords of Ruin, I’ve waited a long time to see this band perform live and they completely exceeded mine and a lot of other people’s expectations as the arena was stacked out for their set after the initial song, ‘What’s Left’.

Demonstrating their full range and potential (and what potential), from ‘In From The Cold’ to the almost ballad like ‘Walk The Line’, the tight musicianship, blissful heavy set showcased the meaning of pure versality in the Metal genre, this band are going places and I for one, can’t wait. Absolutely, the standout set of the festival for me – on fire, you would not have known that this band hadn’t played for almost 2 years. Let’s hope they return to a future HRH. 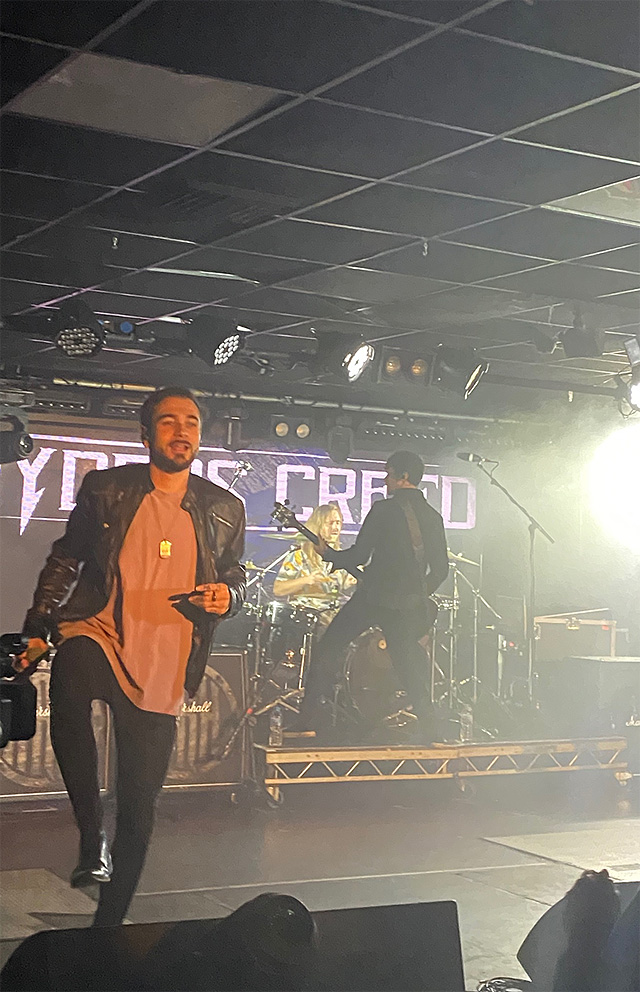 Back to the Main Stage to see Ryders Creed, they are surely on their way up, this band are so tight, opening with ‘Memories’ this is a master class of what NWOCR is all about, young bands coming through with huge talent and potential. Ryan, showing his compassion for what all of us have gone through without our live music fix in the last 2 years and delivering the poignant, heartfelt ‘Believer’, that moved the audience to tears (It is ok, not to be ok) as it struck so many chords. Closing out with ‘My Life’ this was band that deserved an encore – let’s see where you go next, I’ll be watching. 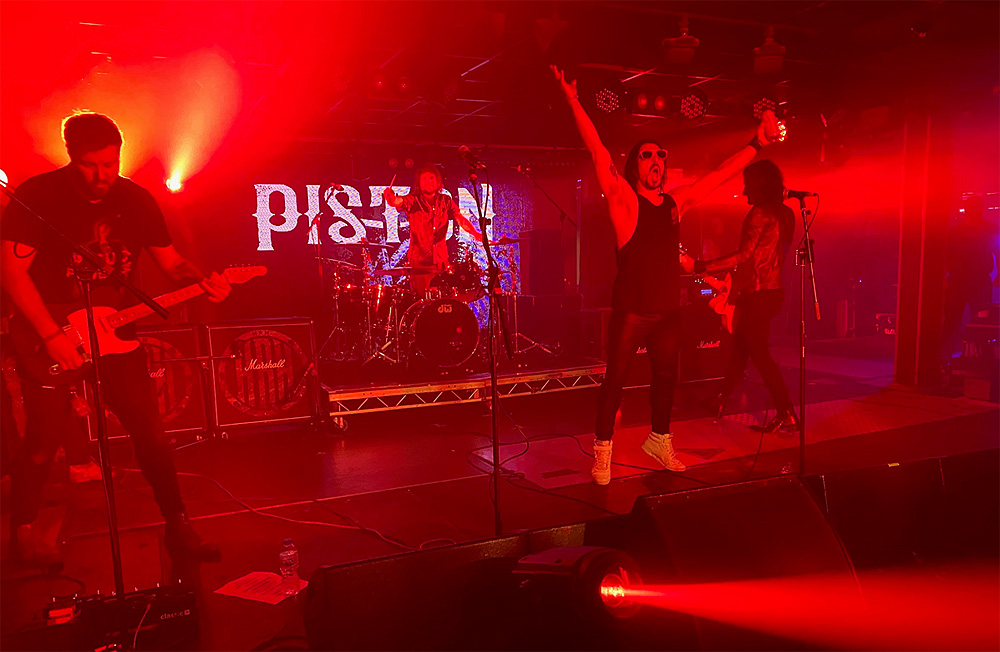 Fourth band of the day was the awesome Piston – Standing front and centre on the rail for Piston was like a walk back to a time when rock was pure rock’n’roll, from the frontman, Rob (even with hairball throat, can of lager seemed to sort that out LOL), the stunning guitar work, to the  insane drummer who can only be described as ‘animal’, I loved this set, I’ll confess I had a complete fangirl moment when Rob removed his top – band crush of the weekend. Highlights ‘Leave if You Dare’, ‘Rainmaker’ and the fun cover of ‘Proud Mary’.

I swop back to Stage 2 to see the False Hearts – this band rock and with Emma at the helm there’s no stopping them, powerful vocals and guitar skills finely demonstrated to a busy crowd, and totally complimented by the rest of the band. A captivating set, I think you have gained some new followers today, I love how people embrace the newer bands as well as the more established. This is a band to check out if you haven’t come across them already. Highlights track wise ‘Misery’, ‘Remedy’ and ‘Breathe Again’.

Due to a pitstop to eat, drink and chat with the HRH family, I caught the tail end of Mercury Rising’s set – suffice it to say I need to hear and see more – sorry I missed the majority, but I will catch you again! 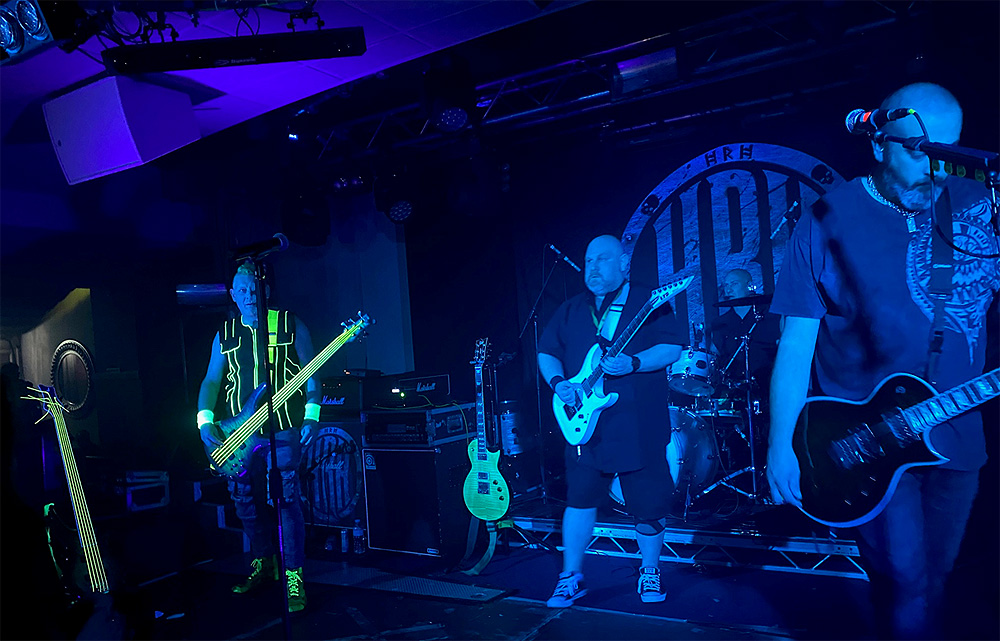 Headliner for Stage 2 was The Darker My Horizon, this band never seem to quite get the recognition they deserve but that changed Saturday night, with security again having to turn people away from Stage 2, TDMH attracted new fans to their enigmatic set, from the get-go of ‘Functional Dysfunctional’ then band were on the finest form I have seen them.

Mark Stephenson on lead guitar plays like a man possessed, the relatively new drummer, Russ has come into his own and Paul Hamilton aka the Neon Warrior (if you know, you know) on bass provides all the rhythm they need – the crowd are engaged, and the banter is flying.

Paul Stead’s vocal range is on display from ‘No Super Hero’ to ‘Perfect’ to the perfect poignancy of ‘Dear Olivia’ as we run up to Remembrance Day, I am watching this with military family, we raise a glass to the fallen and mark our respect. Culminating their epic set with ‘Still Alive’ the whole crowd are bouncing and spirits are high. What a headliner, here’s to next time.

Special mention has to be made for Orange Goblin, Saturday night Stage One Headliners, who were totally immersed in their set when something went wrong in the mosh pit and one of the audience was injured after falling; all credit to the band they spotted it immediately and stopped the set, with security and first aid immediately on hand.

Rock family are always respectful and there was no debate as the room was cleared to allow the experts to take cover the care of the gent involved – after treatment had been delivered, and the band knew the person concerned was going to be ok, the band came back and played 3 songs to complete their set to approximately 30 hardcore fans who had stuck around. Fair play to all concerned, no-one would have batted an eyelid if the band had decided not to come back on, despite a rather disrupted set, the headliner pulled it off and were as heavy rock as ever.

Special mention 2 to The Darker My Horizon who not only did their planned acoustic set on Friday but stepped in last minute on Saturday morning to cover for not one, but two bands acoustic sets and then carried onto headline Stage 2 – legend status continues.

A thanks has to go to Lords of Ruin, who created a playlist with 2 tracks for every band on the bill and shared it ahead of the event – that takes effort and time, it was something I had been intending to do myself but hadn’t got round to. Thank you, Dox, you made my journey to Great Yarmouth fly by!

A few too many beers may have been imbibed over the weekend by a fair few of us, it is fair to say that the HRH family certainly know how to party and then some! What a great atmosphere, what a phenomenal line up, we have all collectively waited a long time for this to happen and there was definitely a sense of making up for lost time, seeing reunions of HRH regulars, making new friends, catching up with old friends seen and plans for HRH 2022 in hand already – I’ll be back :0)

Stand Out Sets of the Weekend: