Album review: SABATON – The War To End All Wars 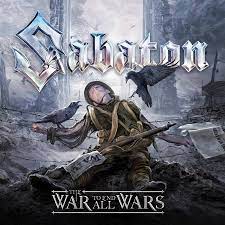 With the last Sabaton album, The Great War, the band led us through some of main events of the First World War and gave the listener an overview of the hell that was both unleashed and endured by all involved. However, covering such a huge conflict in the course of one album was a tall order and the guys felt there were further tales to tell and headed back to the studio to record a follow up, namely The War To End All Wars.

Again, as with The Great War there are two versions available, the first just gives you the music but the second, the history version, gives you a spoken intro to the tracks and adds a bit of background to the subject matter.

The opening track ‘Sarajevo’ takes us back to June 1914 and the assassination of Archduke Franz Ferdinand, the spark which lit the wildfire. The track is a slow builder with a majestic melody befitting such a pivotal moment in history, complete with the usual trademark Sabaton harmonies.

The idea behind the album was to explore some of the lesser known stories of the First World War and to highlight some of the unsung heroes of the conflict. ‘Stormtroopers’ focuses on those in the front line trenches giving the ultimate sacrifice and heading over the top to death or glory. This is a fast paced track with riffs flying like rapid fire and Hannes Van Dahl on drums providing the artillery barrage.

We then take to the high seas with the story of the mighty ‘Dreadnought’, the fearsome battle cruiser that dominated the oceans. ‘The Unkillable Soldier’ then tells the tale of the fantastically named Sir Adrian Carton De Wiart. Sir Adrian survived multiple gunshot wounds and a plane crash but continued fighting on, never giving up the battle. This is another track built on a great riff and excellent harmonies and also includes some great twin guitar work by Chris Rorland and Tommy Johannson.

‘Soldier Of Heaven’ then takes us to the snowy Alpen slopes where soldiers froze to death whilst protecting the far border posts and who were lost under the snow for eternity. We then charge out on a full metal attack with the 369th Regiment who were known as the ‘Hellfighters’. These fearsome fighters gained a reputation for not backing down and fighting on regardless and here they are appropriately celebrated with one of the heaviest tracks on the album.

The guys then tell the story of the ‘Race To The Sea’ which played out in Belgium in autumn 1914 and included fierce fighting around Ypres as the battle raged towards the North Sea coast. The song features a strong vocal performance from Joakim Borden with the rest of the band joining in the chorus with more big harmonies.

One of the most interesting stories covered on the album concerns a Serbian woman called Milunka Savic who disguised herself and took her brother’s place on the battlefield. ‘Lady Of The Dark’ tells her tale as she fought bravely alongside the men and became one of the most decorated soldiers of the conflict.

‘The Valley Of Death’ then takes us back to the frontline trenches and the relentless wave of attacks suffered by the troops holding the lines. Again, the drumming of Dahl alongside the bass work of Par Sundstrom drive the track on whist the twin guitar attack cuts through like machine gun fire.

One of the most well known stories of the First World War concerns the ‘Christmas Truce’ when on Christmas Eve 1914 the guns fell silent and the opposing sides ventured into no man’s land and became friends for a short period.

A quiet piano led intro is joined by a heartfelt vocal from Borden which takes us into the highlight of the album. The track is a majestic piece, complete with a choir on the chorus, which celebrates this brief moment where the guns stopped, the futility of the battle was forgotten and humanity triumphed.

The last song concerns the peace treaty being signed at ‘Versailles’ in June 1919 following 4 years of bloody conflict. This treaty was meant to bring lasting peace after ‘The War To End All Wars’ but unfortunately as history proves this was not to be.

With this track the band strike a victorious note as was no doubt felt around the world back in 1919, but the lyrics tell the story of discontent and humiliation felt in some quarters that would grow over the coming years and lead to further conflict.

Sabaton have created another fantastic album that once again entertains and educates in equal measure whilst rocking hard and heavy. The melodies and harmonies across the album are spot on  and the album is a perfect companion piece to the last album ‘The Great War’.

I think the campaign should start now to get Sabaton added to the National Curriculum, what better way to impart history than through the power of metal? The battle rages on…  *****