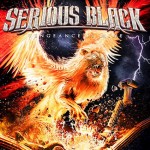 Their reputation for international membership has continued throughout a 7 years and counting career.

Greek guitarist/Keyboard player, Bob Katsionis left briefly, but is now back in the band.

Sounds a lot of activity, but it doesn’t add up to many changes, indeed, arguably, this a much more stable line up than most metal bands enjoy.

And you can hear it in the music. Bassist Lochert does the majority of the writing, producing and mixing, and has bravely declared “this time we’ve really pulled out all the stops to get the optimum result”.

New vocalist Mijic merges his vocals with the instrumentation like a true professional. His voice control … raising the temperature when he needs to, cooling when he doesn’t … proves him to be a perfect fit.

A handful of tracks at the core of Vengeance Is Mine is the fulcrum around which the rest of the album spins.

‘Fallen Hero’s pneumatically powered riffs and pumping rhythms play their part, but are content to provide a support role to Katsionis’s dancing keys and spine tingling orchestration. Like other tracks here, the song’s melodic backbone and anthemic chorus are perfectly structured and weighted.

Other tracks are perhaps not as immediately attractive and exciting as these, losing the album consistency from time to time. That said, ‘Rock With Me’, a mixed bag of theatrics and heavy metal immediacy, is the ideal album opener. ***1/2