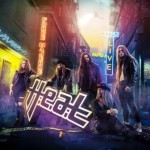 H.E.A.T’s seventh album has been anticipated with some curiosity. 2020’s misleadingly entitled ‘H.E.A.T II’ was a  refreshing return to their trademark anthemic melodic rock sound, after the experimental ‘Into The Great Unknown’ but singer Erik Gronwall, who had done so much to take them to a new level, left shortly after (fortunately, after overcoming a major health scare he has now landed his dream job in Skid Row).  Jaws dropped when his replacement was none other than his predecessor Kenny Leckremo who sang on the first two albums but left over a decade ago.

From his opening ‘who-oah’ on ‘Back To The Rhythm’ his range is impressive and the song is classic H.E.A.T (in fact owing a little to ‘Breaking The Silence’)  but steering a middle course between melodic rock and Euro metal in a similar fashion to Kissin Dynamite. The way he sings ‘back from the dead’ in the closing part of the song could be almost autobiographical.

However ‘Nationwide’ is out and out heavy rock with Dave Dalone’s rapid fire riffing reminding me of ‘Defenders Of The Faith’ period  Judas Priest,  though the chorus is weak by their standards. The guitarist is all over this album in a way I have rarely noticed before while Jonah Tee’s keys play very much a supporting role and where they do feature, it tends to be the organ that is noticeable.

The singer’s delivery on another heavy number ‘Tainted Blood’  is very similar to that of Joey Tempest on Europe’s early pre-fame albums, while he fairly screams the lyric ‘force inside of me’.

Heavier and riffier than its predecessor, albeit in an evolutionary rather than revolutionary way, it is certainly not a return to the more out and out melodic rock/AOR of the singer’s first stint with the band, quite the reverse, and anyone who hoped for that is likely to be disappointed.

‘Hollywood’ has the intensity of contemporaries Eclipse with chanted style vocals – in many ways it lacks melody by their standards and yet the chorus hook is insidiously catchy.  So far there has been a hardly a pause for breath but ‘Harder To Breathe’,  while just as heavy is delivered at a slower pace which really brings out the hooks, and may even be my favourite track.

‘Not 4 Sale’ is another with that hard-hitting Eclipse feel but a more reassuringly H.E.A.T-like big chorus while ‘One Of Us’ is a quasi ballad with the piano more prominent but still with a heavy feel and almost operatic in nature. ‘Hold Your Fire’, again sounding like early Europe, starts with more of a groove to it yet develops in fast and heavy fashion ending in a big vocal scream of ‘fire’!

They then dip their toe in even heavier waters – ‘Paramount’ verges on symphonic metal with some Viking-style chanting but ‘Demon Eyes’, opening like a speed metal version of Deep Purple, arguably strays too far from the trademark H.E.A.T sound, rapid fire with some neo-classical shredding from Dave Dalone and more reminiscent of Jona Tee and Erik Gronwall’s power metal ‘New Horizon’ project.  Album closer ‘Wings Of An Aeroplane’ is more recognisably H.E.A.T – indeed it shares many similarities with ‘Rise’, the last track on H.E.A.T II – and yet again there is a strong hint of Joey Tempest on the vocals.

The production is razor sharp, bringing out the sheer hugeness of the sound, while after his time away Kenny Leckremo seems a new person: his voice has greater depth and range than his predecessor, allowing the band to take the sound in different directions.  All doubts are laid to rest over whether he could fill Erik Gronwall’s shoes (though to replicate his energetic live act will be the tallest of orders).

While personally I miss the old melodic and lighter H.E.A.T sound, this is a mighty impressive statement that will broaden their appeal to heavier markets.  **** 1/4