I will freely admit that Cats in Space are one of my very favourite bands to have emerged in the past few years. Their sound is unashamedly inspired by the second half of the seventies but the combination of lush harmonies, symphonic arrangements and dual guitars ticks a lot of boxes for me and they have created something original that really stands out among more identikit bands in the current classic rock scene. 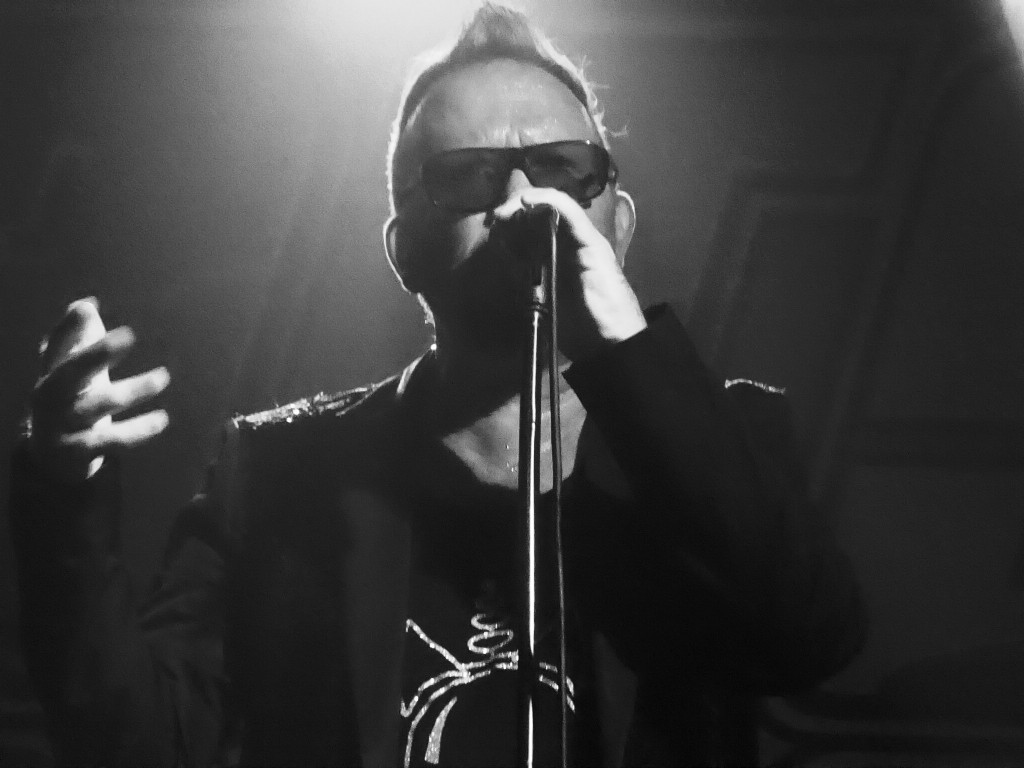 I’ve seen them many times, yet missed some key shows for a variety of reasons,  so still felt unfinished business. Moreover the last two years have been a time of change for the band, so this was a first chance to see them with new singer Damien Edwards and promoting their fourth,  and possibly most accomplished yet, album in ‘Atlantis’.

Support came from Vambo, another band who draw on the seventies for inspiration, but in their case the classic pioneering hard rock of Purple and Zeppelin, though charismatic singer Jack Stiles’ man bun is definitely more contemporary. The venue did them no favours- a delayed opening meant the crowd outside were only just starting to funnel in when they hit the stage. A very favourable early impression was made by new single ‘This is Your Life’ with its guitar riff owing something to ‘Stargazer’! 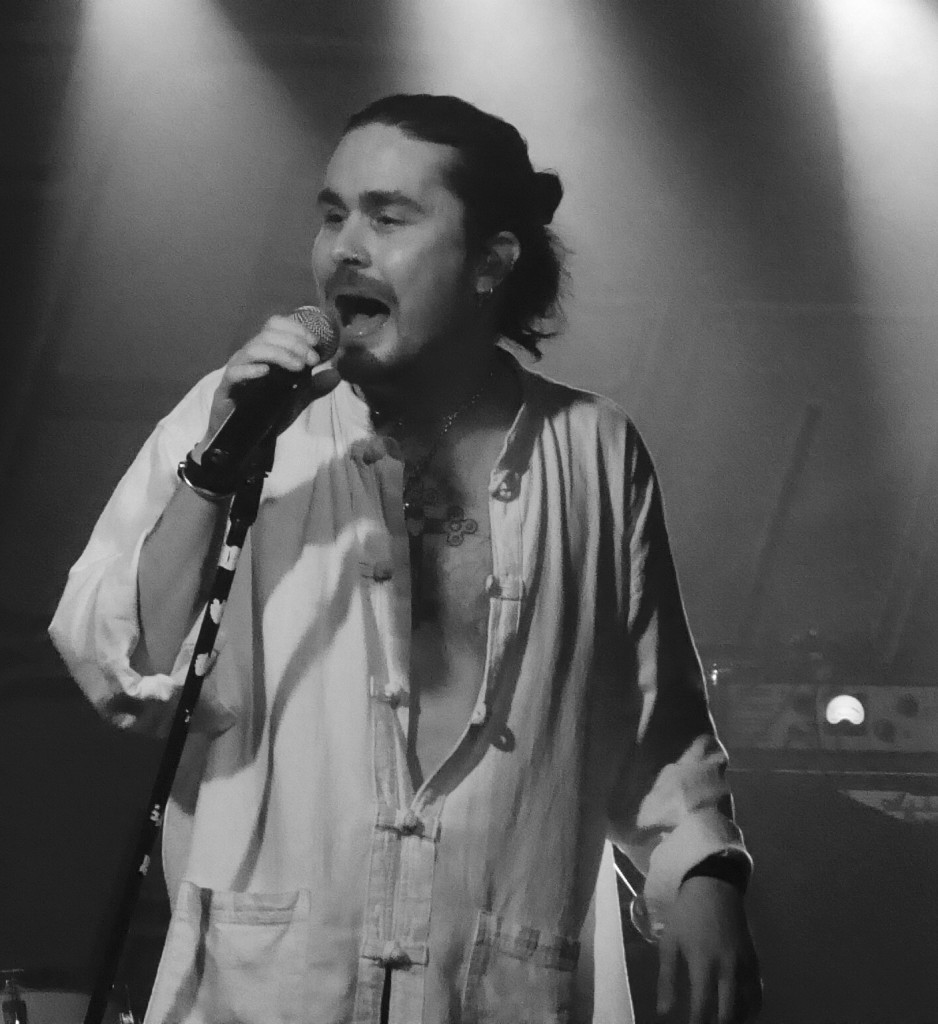 Their own songs were impressively powerful including ‘Running in Circles’ and ‘We’re Not the Same’, with some meaty riffs from the Gibson-wielding Pete Lance, while at times Jack’s vocals reminded me of Ronnie James Dio in his Rainbow days. But in unashamed tribute to their idols, they covered ‘Good Times Bad Times’ and- after an original in ‘Down Little Mama’ – ‘Burn’, which they have made something of a trademark in their career to date.

Even the absence of keyboards did not stop the odd outbreak of head shaking. But the fact it was followed by ‘Fast Car’, an original that came over like a little cousin of ‘Highway Star’ summed up the dilemma they will face as they go forwards- how to attract attention while developing their own style. On this evidence they certainly have the talent to do so. 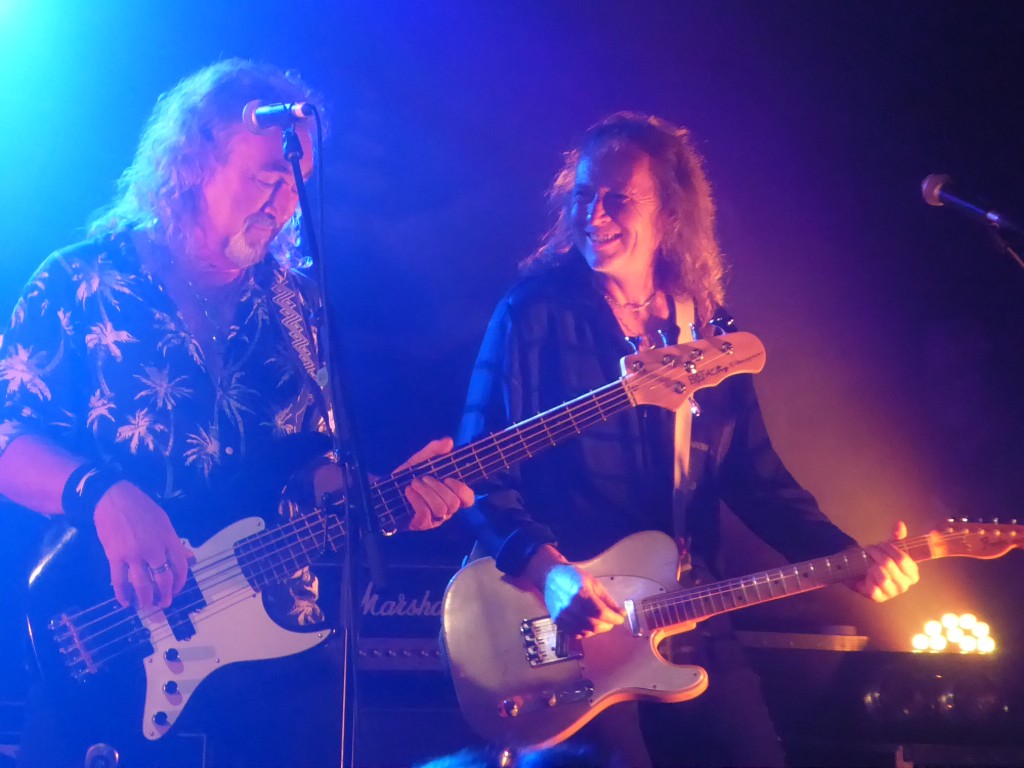 Cats in Space took the stage to the ‘Dive’ intro theme from ‘Atlantis’, yet started as every CiS show seems to with the title track from their debut  ‘Too Many Gods’ with an epic pomp feel and some high vocal harmonies little short of magnificent, before moving onto a pair from the new album in ‘Spaceship Superstar’ and ‘Revolution’.

‘Twilight’ reminded me of ELO, though the title was coincidental and the first album pair of ‘Mr Heartache’ and  ‘Only in Vegas’ and completed a trio of songs more at the soft rock end of their spectrum before the lush balladry of ‘Scars’. Damien Edwards was handling old and new material with equal assurance and an impressive vocal range. 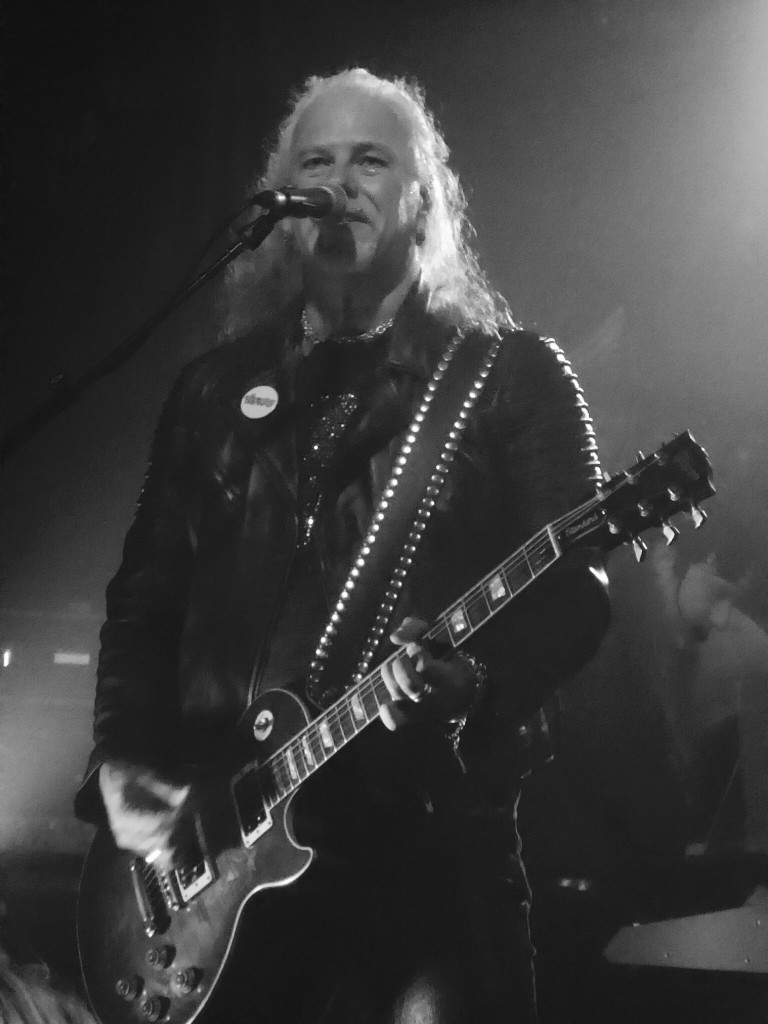 With no gimmicks like the ‘Narnia’ theme of the pre-pandemic tour, the music was allowed to speak for itself but however good it was, I began to feel a little uneasy. It is well known that attendances are down with people anxious and reluctant for a number of reasons to again take up the opportunity of live music again, and this night was no exception with a considerably smaller crowd thinly dotted around the Garage than attended their two 2019 shows here.

Combined with the fact Damien, spangly jacket aside, has a low key stage presence and was not one for charging around the stage or rabble-rousing between song chat, and a set up that had the band bathed in very low light most of the time, this contributed, I felt, to an oddly flat atmosphere. Even a rocker like ‘Silver and Gold’  was only met by polite applause, and I am sure at one point I saw Damien and founding guitarist Greg Hart turn to each other in an attempt to raise a bigger response and say ‘come on, its Saturday night’ or words to that effect. 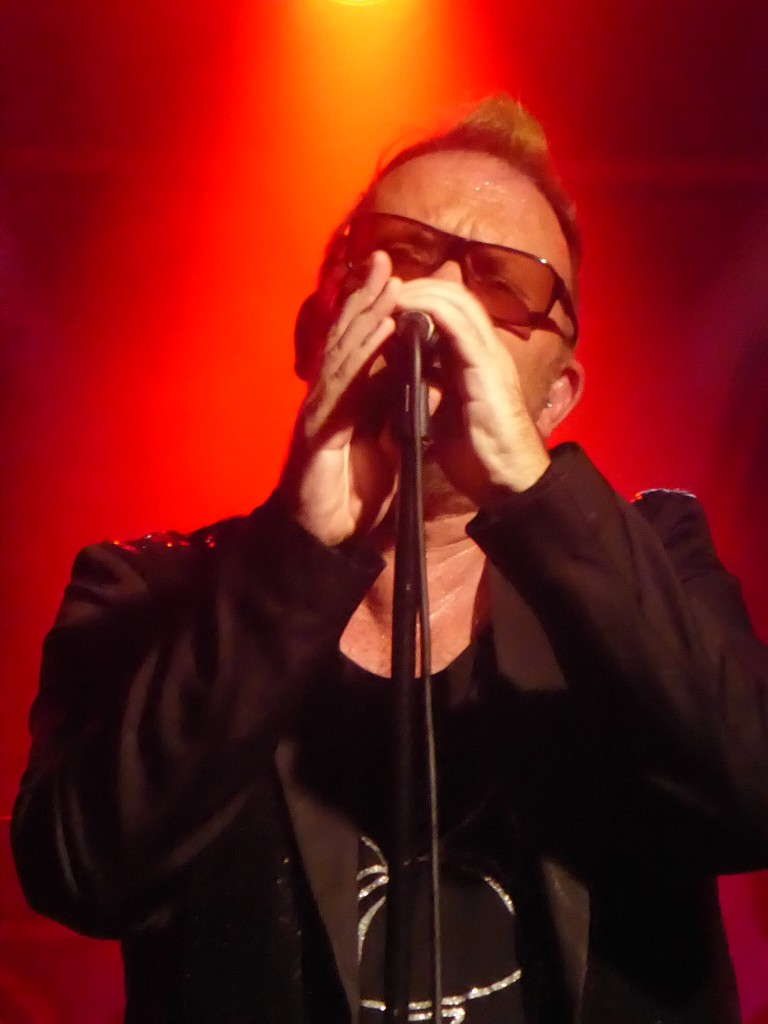 Fortunately things soon picked up, notably with the guilty pleasure ‘Thunder in the Night’,  this brilliant pastiche of the days when the likes of Kiss dabbled in late seventies disco, sparking a few to jump up and down to the chorus and ‘Listen to the Radio’, with its irresistible melodies and chorus, though ironically such is the industry now that it would not stand a chance of being played on contemporary radio stations other than the niche classic rock market.

In contrast ‘September Rain’ was given an unusual treatment with Andy Stewart’s thorough keyboard work the sole instrumental backing as Damien, Greg and bassist Jeff Brown sang in harmony, while keyboard sounds were equally prominent on ‘The Mad Hatters Tea Party’. 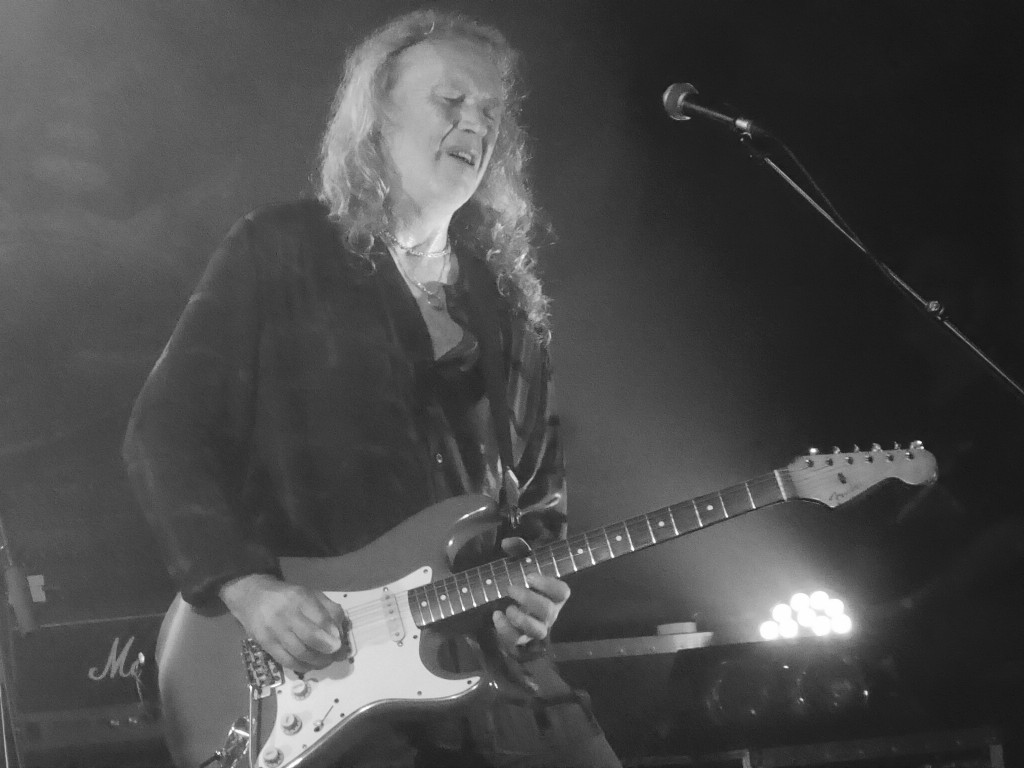 However a personal highlight was a pair of my favourite songs from ’Atlantis’ showing their more over the top pomp rock leanings in ‘Marionette’ and the title track, the latter like a cross between Styx and early 1970’s Who.  The ornate ‘I Fell Out Of Love With Rock’n’ Roll’ was the latest in a recurring theme of Cats songs, looking back to a halcyon musical time, before the main set ended as it had begun with another first album ‘epic’ in ‘The Greatest Story Never Told’, with superb singing from Jeff on the intro, and brilliant musicianship with Greg and Dean Howard moving in to jam together and pull some poses for the first time in the night. 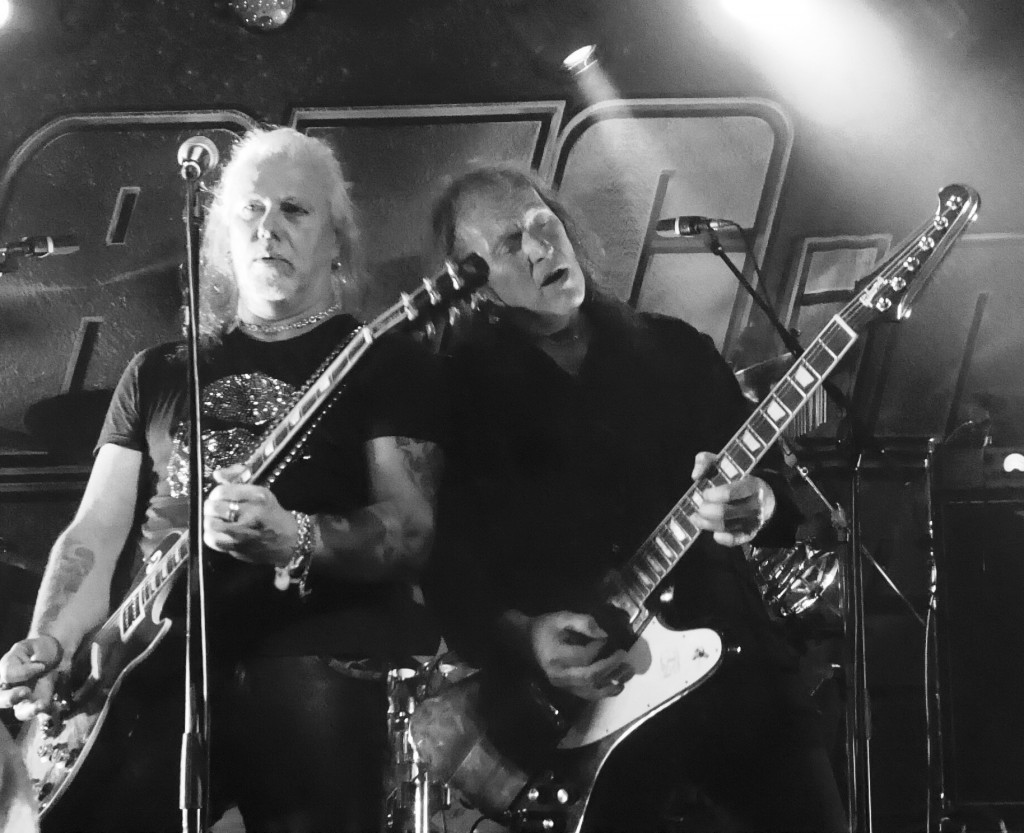 There was a slight surprise for the encore in ‘Hologram Man’, another of their sardonic satires on modern musical trends, which seems to have replaced long-standing favourite ‘Five Minute Celebrity’ as the more straight ahead out and out rocker to close the set.

With the cream (pun intended!) of all four albums well represented in a generous hour and a half set devoid of any padding, this was the most satisfying musical saucer of all the Cats shows I have seen to date. While at times it wasn’t the easiest gig to get into with the sparse crowd, it still ended up being a masterclass of great songs. 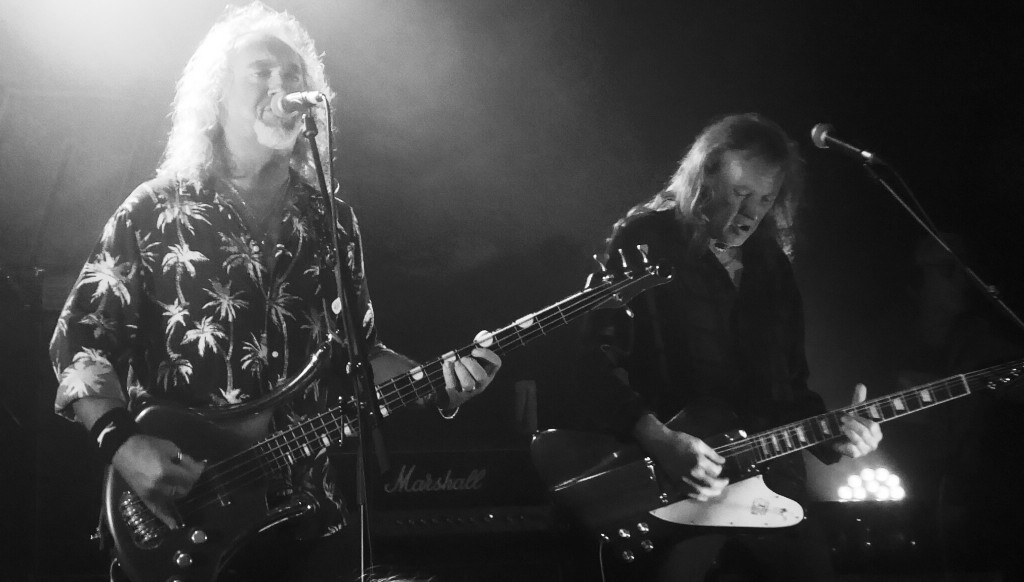 Album review (The Best of)